Uber chief urges employees to 'do the right thing'

SAN FRANCISCO - Uber's recently-installed chief laid out a moral creed for the controversy-battered ride-sharing firm on Tuesday (Nov 8), urging employees to "do the right thing."

"The culture and approach that got Uber where it is today is not what will get us to the next level," Uber chief Dara Khosrowshahi said in a message to workers shared in an online post.

"As we move from an era of growth at all costs to one of responsible growth, our culture needs to evolve."

Uber hired Expedia boss Khosrowshahi as its new chief executive in August in the hopes he can steer the ridesharing service away from the string of controversies it has faced in the past year.

Khosrowshahi is credited with turning Expedia into a global travel services behemoth, winning admiration from employees along the way.

New Uber workplace "norms" outlined by Khosrowshahi included celebrating diverse backgrounds, along with "We do the right thing - period." .

Huffington credited Uber co-founder Travis Kalanick with driving the startup to a nearly US$70 billion (S$95.4 billion) valuation - even though he was ousted as boss in June for presiding over a cutthroat workplace culture, harassment, discrimination and questionable business tactics to thwart rivals.

Khosrowshahi is the steady hand needed now on the wheel, Huffington said. Huffington spoke of a Silicon Valley culture that overlooks transgressions of "top performers" who deliver results.

In his message to employees, Khosrowshahi cited an Uber practice of "toe-stepping," which he said was intended to let people speak their minds regardless of their positions but was "too often used as an excuse for being an a**hole."

Uber launched an "urgent investigation" early this year after an engineer who worked at the company until late 2016 alleged that her manager made sexual advances shortly after she joined.

She wrote in a blog post that she complained to more senior managers and the company's human resources department, but was told that it was the man's "first offence" and that they wouldn't feel comfortable punishing a "high performer."

The woman said she met other female Uber engineers who said they had experienced similar harassment.

Uber hired former attorney general Eric Holder to review workplace conditions after the allegations. The probe resulted in firings and an outline for needed changes.

Khosrowshahi is also trimming expensive programs as he prepares Uber for a stock market debut by 2019, according to Huffington.

The new CEO's challenges include conflicts with regulators and taxi operators, a cutthroat company culture and board members feuding with investors over Kalanick.

Uber's board of directors recently approved a plan that reins in the influence of co-founder and ousted chief Kalanick - who retains a seat on the board - and opens the door to a colossal investment by Japanese telecommunications giant SoftBank.

"Our values define who we are and how we work, but I have heard from many employees that some do not represent the kind of business we want to be," Khosrowshahi said."We will put integrity at the core of all our decisions."

Uber has hired a new chief legal officer ahead of the December start of a trial in a civil suit filed by Waymo, the self-driving car unit of Google-parent Alphabet. 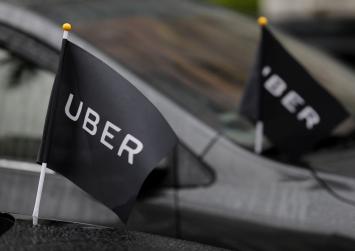 The case stems from a lawsuit filed in February by Waymo, which claimed former manager Anthony Levandowski took a trove of technical data with him when he left to launch a competing venture that went on to become Otto and was later acquired by Uber.

Waymo argued in the lawsuit that a "calculated theft" of its technology netted Otto a buyout of more than US$500 million and enabled Uber to revive a stalled self-driving car programme.

Uber acquired commercial transport-focused Otto late last year as the company pressed ahead with its pursuit of self-driving technology.