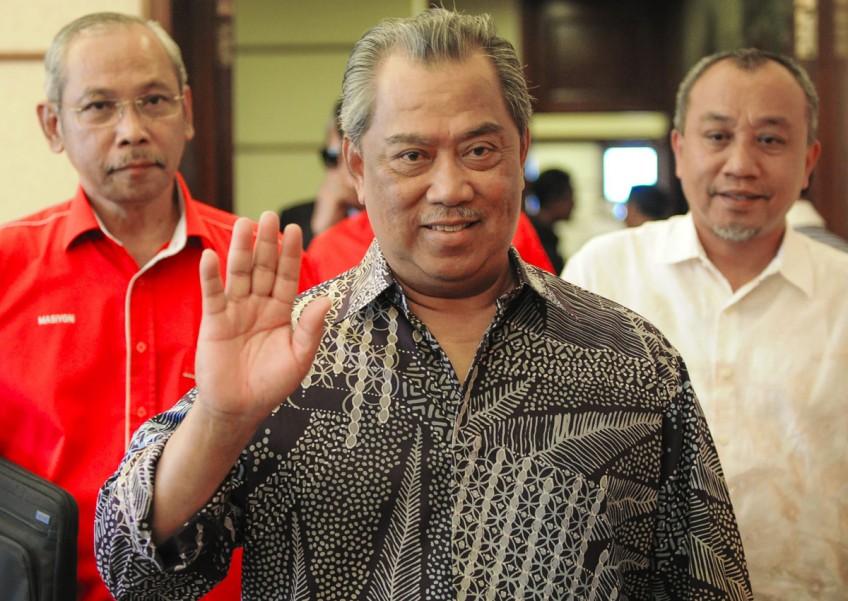 "Everyone is very afraid to voice out. Even though the country has reached such a situation, (they) still do not want to do anything. '' Mr Muhyiddin Yassin (centre), the former deputy prime minister.
AFP

"I am the only one speaking up. What are the others doing? You are all cowards, afraid of being sacked as branch chief, division chief or MP," said Tan Sri Muhyiddin yesterday at a forum in Johor organised by Bahasa daily Sinar Harian, using his strongest words yet against fellow Umno members.

He was sacked from the Cabinet by Prime Minister Najib Razak in July after raising criticisms against 1MDB and the US$700 million (S$979 million) discovered in the bank accounts of the Premier.

Mr Muhyiddin remains the deputy president of Umno, but has been cold-shouldered by most party leaders since the sacking. He joined former prime minister Mahathir Mohamad and former finance minister Razaleigh Hamzah this month to criticise PM Najib.

"Everyone is very afraid to voice out. Even though the country has reached such a situation, (they) still do not want to do anything. Outsiders are asking me what has happened," said Mr Muhyiddin, quoted by the newspaper on its website.

Mr Najib is facing mounting pressure to satisfactorily explain the RM42 billion (S$13.8 billion) debt racked up by 1MDB and the massive amount of money found in his personal accounts.

Mr Muhyiddin's comments were made on the same day that 13 Umno branch chiefs in Negeri Sembilan openly asked Datuk Seri Najib to resign, saying they had lost confidence in his leadership.

The 13 branch leaders from the Telok Kemang Umno division, which has 54 branches in total, believe that Mr Najib must go to prevent voters from penalising Umno at the next general election, which must be called by mid-2018.

"The time has come for Umno to accept changes. This time, change has to start with our beloved president," said Mr Kamarul Azman Habibur Rahman, one of the branch leaders, as quoted by Malaysiakini news site.

While their protest against Mr Najib is a drop in the ocean - Umno has more than 20,000 branches under its 191 divisions - their open demand for PM Najib's resignation shows that Malaysia's Premier has some way to go to smoothen feathers in his own party that has been shaken by the financial scandal.

Political analyst Mohd Azizuddin Mohd Sani said that although the call for the Premier to quit involves a small number of people, continuous criticism of his leadership bodes ill for Mr Najib.

Reacting to the call, Umno MP Hasan Malek told The Sunday Times that members are free to voice out but cautioned that the "silent majority" still supported Mr Najib.

"We need to take note of this and investigate what are their points and what exactly is the issue. Is it the whole branch that is calling for Najib's resignation or just one or two members?" Mr Hasan said.