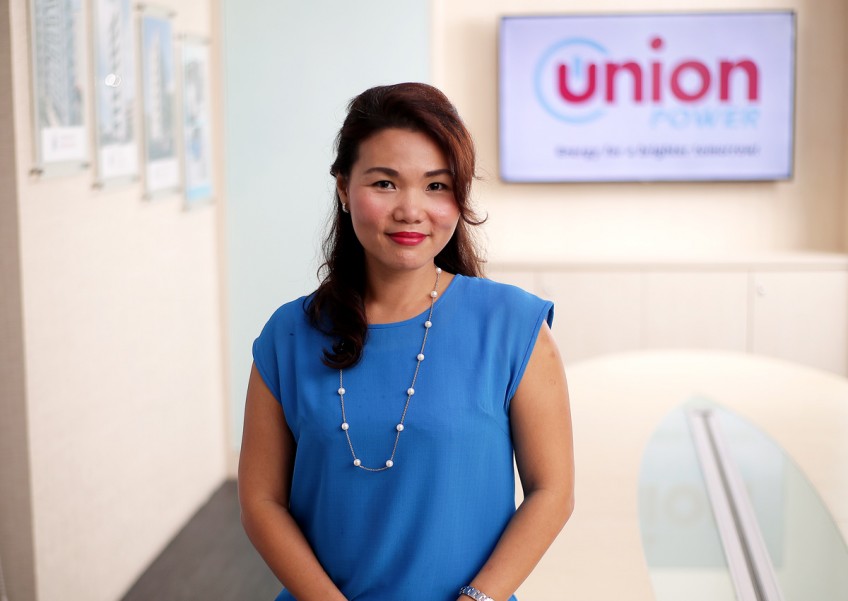 The company's executive director Ellen Teo says the firm is banking on its customers of bottled gas, CNG and diesel to buy electricity from it as well "because there's already trust and a relationship".
The Business Times

The largest bottled-gas supplier in Singapore is making a foray into the electricity sector, hoping to stake a claim in the growing pie ahead of the full liberalisation of the market next year.

Union Energy Corporation has started a subsidiary, Union Power, to offer electricity to industrial and commercial customers, and eventually, to residential ones as well.

The family-owned firm is banking on its existing customers who use its current offerings of liquefied petroleum gas (LPG), compressed natural gas (CNG) and diesel to give it a competitive advantage in an increasingly crowded space.

Its executive director Ellen Teo told The Business Times in an interview: "In our initial phase, we aim to convert some of our existing customers, and also leverage our existing network and capability."

Next, Union Power hopes to target customers such as data centres, which have been identified as a growth sector.

The group sees synergies between its new electricity business and its current offerings.

For instance, food and beverage establishments to which it supplies LPG also need electricity to run.

"We are looking at the same customer but on two different product or services," said Ms Teo.

Union Power is the latest in a string of companies seeking to enter the electricity sector, attracted by the potential for change as the sector marches toward full liberalisation.

Singapore's electricity market has been gradually opened up since 2001; steadily more consumers have been handed the freedom to switch from buying electricity at the regulated tariff from SP Services to buying from an electricity retailer who offers packages with different price plans.

At the moment, only consumers using above two megawatt an hour - mainly industrial and commercial consumers - can do so; another 1.3 million consumers, mainly households, will enjoy this flexibility by the second half of 2018.

Union Power will launch three electricity plans next week for a start.

One offers a fixed tariff rate; the second offers a guaranteed discount from the regulated tariff by SP Services, which is revised every quarter; the third will provide cheaper electricity - with a discount of about 5 per cent from peak hour rates - for customers using electricity at night.

These plans are similar to what other independent retailers are offering, but many customers in Singapore are still unaware of the available offerings in the market, said Ms Teo, adding that what most SMEs want is convenience.

This is where Union Power's existing relationships with its customers, which cut across broad swathes of businesses and households in Singapore, will be key.

"There's already trust and a relationship; we were not set up only today. We have been there servicing them for the last 40 years. We already have multiple touch points everywhere," she said.

Union Energy started as a LPG distributor in the 1970s; as the largest player in the domestic LPG market now, it controls more than a third of the market by supplying LPG to households, food outlets, government bodies, educational institutions and companies.

The group also sells CNG and diesel to taxis and buses through another subsidiary, Union Gas.

The family owns and runs Trans-Cab Services, the second-largest taxi firm in Singapore, as well.

Union Energy obtained the licence to be an electricity retailer last August, and started working on the systems and plans in October.

Ms Teo described the move into electricity as a "natural progression" in the group's vision to be the first-choice energy provider for homes and businesses.

To enhance awareness of its brand ahead of the full opening up of the market, Union Power will launch its marketing efforts to households by the third quarter.

It has also launched a recruitment drive to build up its core team for the new business.

With the number of electricity retailers jumping from seven in 2013 to 22 now, the market is becoming increasingly competitive.

Ms Teo said: "This place will get crowded, but we are very confident of our existing capability and our strengths."

This article was first published on March 14, 2017.
Get The Business Times for more stories.