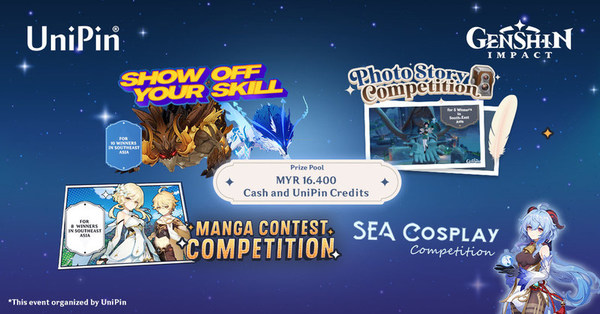 UniPin has prepared a series of competitions full of rewards for Genshin Impact players and fans this November.

The first event to take part in is the Photo Story Competition. In this event, interested fans and players could take their pictures while playing Genshin Impact as usual. Then, they can upload those pictures as Instagram feed or Facebook post in their account with an interesting caption and hashtag #UniPinGIPhotoStory.

In the midst of taking the pictures of the game, competitive Genshin Impact players can also join the Show Off Your Skill competition to prove one's mastery. Players will only need to fight against Boreas or Azhdaha and record the battle. Those with the best combo party may bring home cash, UniPin Credits and exclusive merchandise all at once.

The next event is the SEA Cosplay Competition. The competition is open for any cosplayer to show off the costume of their favorite Genshin Impact characters. There are several winner categories, which are SEA Best Cosplay, Best Male, and Best Female from each country and also eight best cosplayers.

Manga lovers can also join Manga Contest Competition. As simple as uploading one's Genshin Impact manga story to Facebook or Instagram account. Eight most creative stories will be chosen across Southeast Asia to win the prize.

Stand a chance to win a total of more than MYR 16,400 cash and UniPin Credits from all competitions. In the meantime, all the promos and events details can be accessed through the official Instagram account @unipin_malaysia or website www.unipin.com.