CHITTAGONG, BANGLADESH - Media OutReach - June 11, 2018 -Six members of the Asian University for Women Class of 2018 have been recognized for their excellence in academics and their contributions to public service with the Andy Matsui Award for Outstanding Academic Achievement & Leadership . 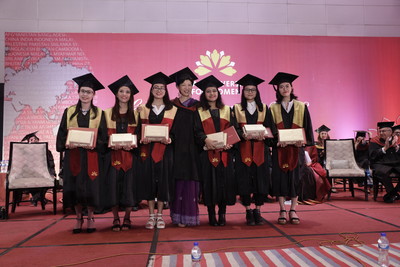 The recipients of the award are Nabila Alam from Bangladesh andTien Thi Cam Huynh , Nguyen Quynh Nhu , Ly Thanh Phuong , Do Thi Anh Thu , and Nguyen Ngoc Tram from Vietnam. The prize, awarded by the Asian University for Women (AUW), is based on the students' undergraduate performance as demonstrated by their cumulative grade point average. The Dean of Faculty and Academic Affairs, Dr. Rosie Bateson , announced the award recipients during AUW's Sixth Commencement Ceremony on 12 May 2018.

Among the people who celebrated the announcement was Andy Matsui's daughter and AUW co-founder Kathy Matsui . "It is such a blessing to our family to be able to support women here at AUW," she shared as the awards were announced.

Nguyen Ngoc Tram , who will begin a Master's degree in Economics at Illinois State University next year, shares, "I come from Quang Nam province, the poorest province in Vietnam, where it was really difficult for us to get education. Andy Matsui's life was similar."

He grew up in a rural village in Japan and was not encouraged to pursue a university education. As the eldest son, Andy was expected to remain on the family farm to care for his parents and siblings, but in 1961, he sailed to the United States with a high school degree, no English language ability, and $28 in his pocket. After years of hard work and dedication as a farmer, Andy eventually became the founder, owner, and president of Matsui Nursery -- American's largest orchid nursery.

"For me, Andy Matsui's courage is very meaningful. The boldness of going against his society's expectations and risking everything to build a new life is truly inspiring. I think that if we have the courage to take risks, work hard, and show perseverance, we can go a long way like Andy Matsui has," says Nabila Alam .

Nguyen Quynh Nhu agrees, "Andy Matsui's life is a clear example of courage, passion, and adventure. As a fresh graduate, I am still figuring out what I want to do and who I want to become, but through Andy Matsui's example, I know that achievement will come to those who dare to choose the path that others are afraid to take. Through Andy, I understand that if there is a will, there is a way."

Looking ahead, Nhu plans to earn her PhD in Economics and bring resources to the most impoverished parts of her home country. "Though Vietnam's economy is growing, the wealth gap between the rich and the poor is still very large. In many places, especially the rural areas, there is no bridge for the residents to pass the rivers. Kids have to swim from one side of the river to the other side for school. I want to initiate projects that bring sustainable development and opportunities for those who have the passion to pursue a better life but lack the resources to do so," Nhu says.

To Kathy Matsui, AUW students represent "pebbles thrown into the pond, eventually having positive ripple effects on the rest of their communities for generations to come." Andy has likewise shown that just one courageous and hardworking individual can take charge of his or her fate and ultimately transform the lives of thousands of people, their families, and their communities for years to come.

"I believe in the power of education because AUW has increased the knowledge and confidence I need to change my community. As a result, I admire Andy Matsui's effort and practical action in supporting the undergraduate education of many people who have financial difficulties. His generous donation to AUW has been helping many young women pursue a university degree. I am confident that many young women and girls will change their lives because of Andy Matsui's support," says Ly Thanh Phuong , who plans to use her AUW education and network to develop a leadership and mentorship program for Vietnamese youths.

Do Thi Anh Thu agrees, "I think we can all learn the importance of receiving and giving back from Andy Matsui. He received support and help from many different people and now he gives it back in many different ways to support even more people, including AUW students. If we can all understand the value of receiving and giving back, more and more people will be helped and this world will be a better place."

Like many AUW students, Andy Matsui grew up in a rural village in Japan. He was not encouraged to pursue a university education. Instead, he was expected to remain on the family farm to care for his parents and siblings. Again like many AUW students, however, Andy also fought to defy cultural conventions and succeed on his own terms. He sailed from Japan to America with $28 in 1961, and eventually became the founder, owner and president of Matsui Nursery, America's largest orchid nursery. Having never attended college himself, Andy now donates millions to The Matsui Foundation so children of immigrants may earn a university education.   Andy's courage, self-reliance and generosity have been a blueprint for his four children, who all graduated from Harvard and became leaders in business and medicine. His daughter Kathy Matsui is Vice Chairman at Goldman Sachs Japan and AUW Co-Founder.

About Asian University for Women

Founded in 2008 and located in Chittagong, Bangladesh, Asian University for Women is the first of its kind: a regional institution dedicated to women's education and leadership development -- international in outlook, but rooted in the contexts and aspirations of the people of Asia.  Students from 15 countries attend AUW. This University exists solely to support a rising network of women leaders, entrepreneurs and change makers from across the region. It seeks out women who have significant academic potential and demonstrate courage and a sense of outrage at injustice and are empathic to the woes of other people.  A majority of AUW's students are first in their family to enter university; 98% of AUW's students are on full or near-full scholarship funded by private donors from around the world.  A majority of AUW graduates find employment in the private sector in their home countries while about 25% go on to pursue graduate studies. AUW graduates or former students have been admitted to Stanford, Oxford, Columbia, Brandeis, Surrey, Ewha (South Korea), and a host of other leading universities in the world.

Wuhan virus: Singapore confirms 5th case; patient from Wuhan stayed at her family's home in Ceylon Road
Confusion as WHO corrects China virus global risk level
Wuhan virus: Experts warn against complacency in Indonesia
Child born in November or December: Is his learning ability slower than a January kid?
Chinese online host apologises for travel show plug for 'tasty' bats
Internet laughs at antics of inattentive woman who got knocked down by carpark gantry arm
8 guys reveal the real reasons why they cheat, and they have nothing to do with sex
Kneeling down to 'bai nian'? 'Twinning' on outfits? Tay Ping Hui and other celebs on their favourite CNY traditions
NBA: Kobe Bryant, 13-year-old daughter 'Mambacita' died pursuing her basketball dream
China's President Xi Jinping warns Wuhan virus spread is 'accelerating', country facing 'grave situation'
Actress Lee Sinje turns 44 as she jokes that she is 'a plain and simple housewife'
'Tis the season not to skip sex: Try these positions when you're tired