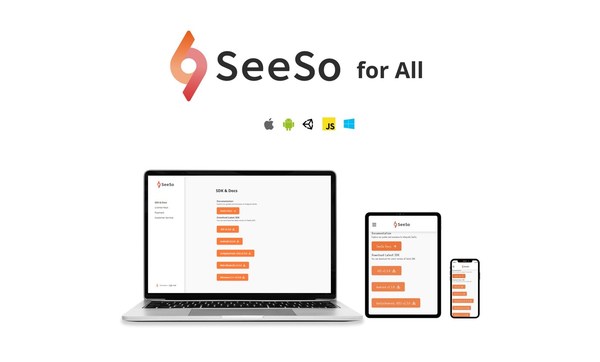 SeeSo is an AI-based eye tracking software that requires no peripheral hardware. The web and Windows SDK has been released for both laptop front cameras and PC webcams.

The web SDK currently supports the latest version of Chrome 80 or higher, and there are plans to further extend support to browsers such as Firefox and Edge by the end of the second quarter of 2021. The Windows SDK was released as a beta version and can be used free by developers for up to 10,000 sessions.

SeeSo SDK was first released for iOS in April 2020; in June 2020, OS support was expanded to Android and Unity. SeeSo is the only eye-tracking software supporting both iOS and Android worldwide, with accuracy of about 1.7 degrees.

With SeeSo supporting about 90% of mobile devices in Korea, services equipped with SeeSo have been commercializing rapidly. Tablet-based educational services with eye-tracking have also been released subsequently for Bisang M-learning, Wise Camp, and LGU+ ElementaryLand. In addition, Milli, one of the largest e-reading platforms in Korea, has also released a new function enabling users to page through documents with their eyes. In the US, game-based learning apps are preparing to launch with SeeSo.

VisualCamp's CEO, Charles Suk said, "With the addition of our web SDK and Windows SDK, the door is opened for wide global development of more innovative contents and services. Web RTC solutions that are actively used for non-face-to-face meetings and classes like Zoom, healthcare services that require gaze bio-markers, or google plug-ins with gaze UI can be implemented with eye-tracking."