SEOUL, South Korea, July 22, 2020 /PRNewswire/ -- WCG Co., Ltd.  (Co-CEOs Tae Geon Seo and Jung Jun Lee, hereinafter referred to as WCG) announced that it had been awarded the "2020 Red Dot Design Award" in the brands & communication design category, marking the first time the award has been won by a multigame esports tournament. 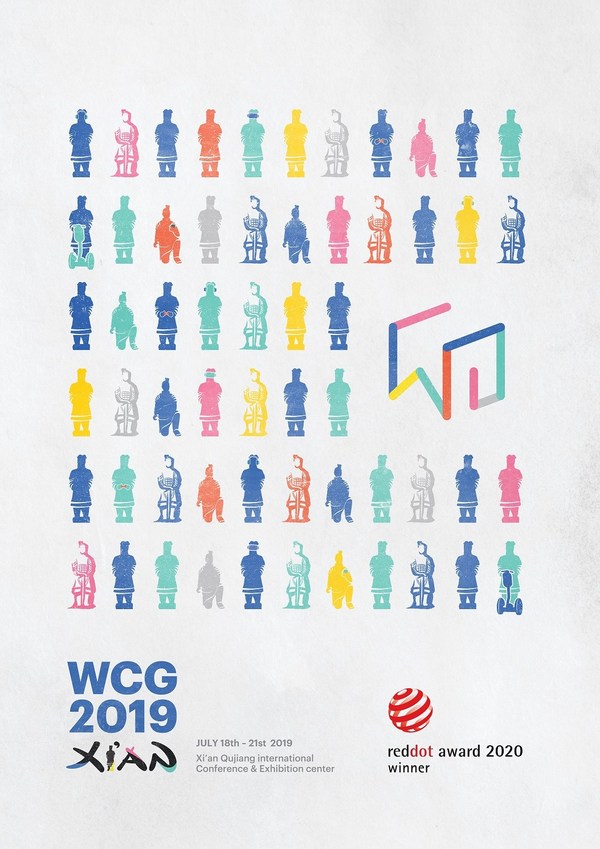 The Red Dot Design Award, established in 1955 and overseen by the Nordrhein Westfalen Design Center in Germany, is one of the world's top three design awards in terms of scale and prestige, along with the German iF Design Award and the US IDEA. At the recently held 2020 Red Dot Design Award, the WCG won the award in the brands & communication design category.

The main poster of WCG 2019 Xi'an used the Terracotta Army, which is a famous relic of the 2019 host city Xi'an in China, to express the dynamic and trendy nature of esports. The WCG applied the same design to various components inside its venue from sculptures to merchandise, creating a friendly atmosphere that received a great response from esports audiences.

"The WCG 2019 focused on expressing the traditions of the city of Xi'an as cultural icons of a new generation of gamers and fans. I am excited about the award because it feels as if our efforts are being recognized. The efforts of WCG staff members and the active participation of gamers worldwide have been our greatest driving force," said WCG Co-CEO Jung Jun Lee. "In response to the support and interest shown last year, we will create another innovative tournament that meets the needs of the current global situation."

WCG 2019 Xi'an was not only a Red Dot Design Award winner, but was also recognized for its innovation at a number of international marketing and design awards, such as the EX Awards, Eventex Awards, Spark Awards, A' Design Awards, and IBDA.

The WCG is currently preparing for the WCG 2020, and details about the upcoming event will soon be released.

WCG, a global esports festival enjoyed by gamers around the world, has adopted the goal and vision of quenching people's thirst for fun and of creating a better world. In order to achieve this, the WCG hosts events with new and colorful contents that can be enjoyed by everyone. Much more than just a simple, esports gaming tournament, WCG is a global festival that unites people around the world. WCG began in 2000 and was held annually until 2013. After a six-year hiatus, WCG 2019 was held in Xi'an, China, marking the reemergence of WCG as a global esports festival.