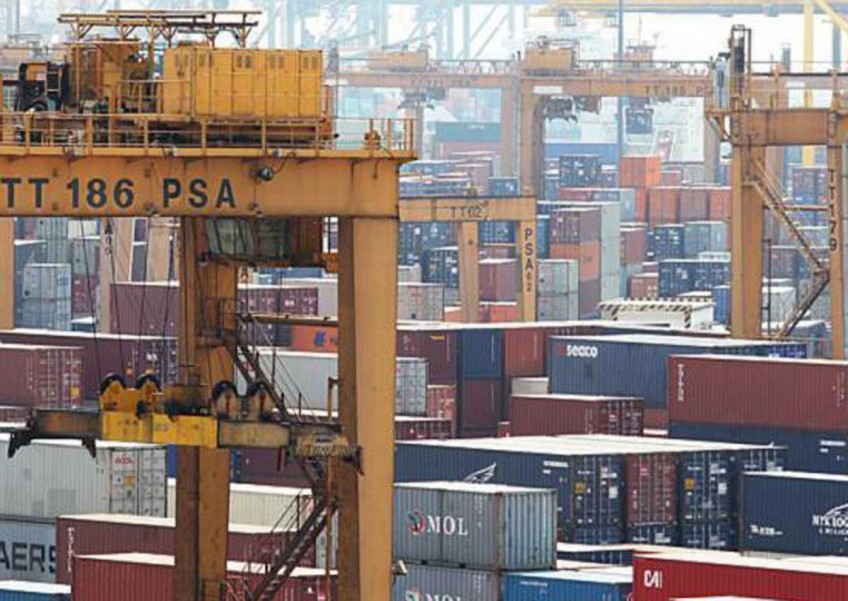 Exports fell more than expected last month, underscoring fears over weak global growth and concerns that Singapore might fall into a technical recession this quarter.

Economists say the numbers, which come after a slew of disappointing data released in recent weeks, also add to mounting expectations that the Monetary Authority of Singapore (MAS) will act to ease the appreciation of the Singapore dollar when it meets next month.

Non-oil domestic exports plunged 8.4 per cent last month, significantly worse than economists' estimates of a 3.5 per cent contraction. The latest slump was also a much poorer showing than in July, when these exports contracted 0.7 per cent.

Last month's fall in shipments was due to a broad weakness across export segments. Electronics shipments slid 2.7 per cent after a 2.5 per cent fall in July, but non-electronics goods dived 10.6 per cent, after slipping 2 per cent in July.

ANZ economists Ng Weiwen and Glenn Maguire said Singapore's economy is unlikely to see an export-led lift any time soon, amid wobbly growth in China and lacklustre domestic demand elsewhere in the region.

While recovery in the US is firming, so far it has been led by the services sector rather than goods-producing sectors, contributing to the ongoing "trade recession" in Asia, they noted.

Yesterday's trade data suggests the manufacturing sector, which makes up a fifth of the Singapore economy, is still struggling and will be the main drag on third-quarter growth, economists said.

Factory output data out next Friday will give a clearer idea of the sector's performance, and also indicate the likelihood of a technical recession - two consecutive quarter-on-quarter declines in gross domestic product - in this quarter.

Some economists remain hopeful that growth in the services and construction sectors will offset the slowdown in factories and stave off a technical recession.

However, OCBC economist Selena Ling said there is a "clear and present danger of the Singapore economy slipping into a technical recession" given the "perfect storm" of weak manufacturing, the China slowdown and other externalities such as the haze.

"Even the SG50 Jubilee celebrations (last month) may not provide much of a lift to domestic consumption and, in turn, to the services growth to offset the overwhelming softness in manufacturing," said Ms Ling, who downgraded her forecast for full-year economic growth from 2.2 per cent to 2 per cent.

MAS is expected to maintain its stance of a modest and gradual appreciation of the Singapore dollar when it meets next month, but more lacklustre data in the coming weeks could tip the balance towards the central bank easing its exchange rate policy, said Credit Suisse economist Michael Wan.

Still, Citi economist Kit Wei Zheng said he "senses policymakers do not see an urgency to move, even though they are incrementally less sanguine".

Among other reasons, they remain confident that growth will be relatively robust next year, and inflation will pick up as a result of the tight labour market driving up salaries, he added.