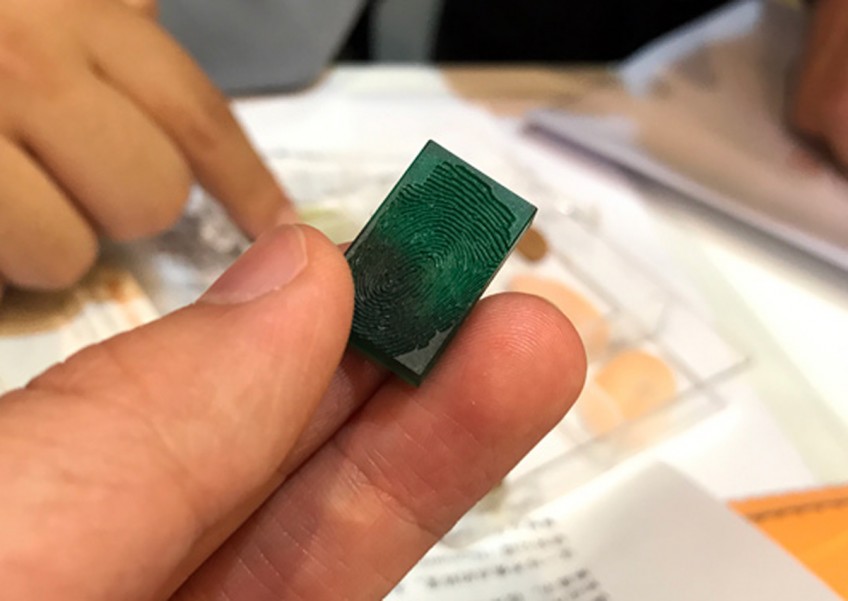 A duplicate fingerprint mold is on display by Precise Biometrics Inc in February, 2017, during the Mobile World Congress held in Barcelona, Spain.
China Daily/Asia News Network

The growth in mobile payments will spur the development of China's digital verification industry.

According to the latest report released by domestic consulting company iResearch, the market scale of China's third-party mobile payment more than doubled in 2016 compared with the previous year, reaching $5,500 billion in total.

The number is nearly 50 times larger than the market scale in the US.

Experts attributed the skyrocketing growth of China's mobile payment to late development, saying the lack of credit card culture has accelerated the switch from cash to mobile payment and the emergence of third-party payment enterprises and mobile payment platforms have pushed the growth rate further.

But the fast-paced development has also raised security concerns.

"As digital payments and e-commerce keep rising, 60 per cent of all transactions will be made through biometric authentication in 2020," added Persson, citing a report by information company Acuity Research.

Therefore it's not surprising that the hardware industry is also growing rapidly.

"The total shipment volume of mobile devices with fingerprint scanner was about 600 million last year, up 100 per cent year-on-year, and the number is expected to reach one billion," he added.

Persson said that although fraud in mobile payments with fingerprint scanning is low today, but it will increase as the number of users and transactions grow.

"The more something is easy to use, the less security it has," said Richard Marko, the chief technology officer of ESET, a global antivirus software provider who works closely with its Chinese partner Version 2 to deliver IT security solutions to the market.

"All of the 'one-click' or 'no-click' authentication methods can be easily misused," he said.

He added that seldom people use proper protection on their mobile devices.

"Whenever a software or hardware is designed, apart from making it user friendly, people should realise that something can be malicious or easily mimicked," he added.

What is the future for mobile payment?

Information company Nielsen Holdings PLC's latest "Global Connected Commerce" report found that 86 per cent of Chinese respondents said they used some form of digital payment systems to pay for online purchases in the past six months, a number that was far higher than all the 26 surveyed countries' average of 43 per cent.

The survey polled 13,000 respondents in 26 countries to determine the approach of consumers to e-commerce.

"Chinese consumers have more payment choices for products and services than ever, while digital payment will continue to win over more Chinese consumers due to its convenient nature," says KiKi Fan, managing director of Nielsen China.

"Emerging technologies, such as ultra sound or optical solutions, have been developing to feed consumer's sweet spots, while fingerprint approach won't be replaced due to its convenience feature," said Precise Biometrics' Persson. "The new adoption of other biometric modalities will continuously increase and become complementary to fingerprint technology."

As the third-party payments apps such as Alipay and Tencent Pay or NFC-driven Apple Pay are widely used in China, people can now effortlessly survive a day without cash, making all their payments digitally with a smartphone.

Statistics from China's central bank, People's Bank of China, show that as of the end of last year, the national average of credit cards per person declined to 0.29.

A survey conducted by the Payment & Clearing Association of China (PCAC) also found the surging cashless trend. It said that 47.5 per cent of the country's payers have tended to choose mobile payment since it is no more necessary to carry cash or any bank cards.

Will the mobile payments completely take over cash and physical cards and accelerate the cash-free society to become a reality?

"It's up to our consumers, if they want to use mobile payment, we'll help digitalize their Master cards and process to purchase in a secure and convenient way," said a spokesman of MasterCard.

The company has also unveiled Masterpass QR, a QR code enabled payment option that lets customers pay for goods and services from their smartphones, to boost digital payment.

"We'll prefer a world without passwords, a world where making payment becomes more convenient and frictionless though individual's biometric authentication solutions," he said.

"Eighty-five per cent of the transactions in the world are still carried using cash. Payment cards and cash have co-existed for many years and so has mobile payment. I don't think digital payment will take over cash or cards overnight. The adaption process will take time."