When history was made in Singapore, the world watched and talked about the #TrumpKimSummit on Twitter

SINGAPORE - Media OutReach - 14 June 2018 - With more than 35 of the world's media outlets live-streaming on Twitter as a sitting US President and a North Korean leader met for the first time in history, and nearly 4 million Tweets shared from 1 June when the Summit was confirmed to 13 June the day after the event, the world watched and talked about the #TrumpKimSummit o n Twitter.

From political leaders to journalists, experts to citizens across the world, Twitter was the only platform where you could see every side of the #USNorthKoreaSummit and to talk about the event - to get a wide range of perspectives, to get a more informed point of view, and to engage with content and conversations at the same time.

Below is a global heatmap showing the live Twitter reaction on the day of the #TrumpKimSummit on 12 June.

This global conversation peaked at 9am SGT on 12 June with 5,200 Tweets per minute as President Trump and Chairman Kim shook hands. 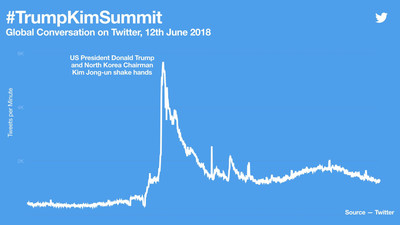 With two LIVE Blue Rooms, news partners also demonstrated that Twitter is the place to innovate and reach an engaged audience.

News partners around the world also created Moments to tell the story of the Summit and how the conversation and commentary unfolded.

From experts live-Tweeting their analysis and observations, to people on the Korean Peninsular joining the conversation, Twitter again demonstrated that it is one of the the best ways to see what's happening and to talk about it . Now, with a joint statement signed by the two leaders and the world waiting to see what happens next, Twitter will be the place to continue the conversation and keep track as news breaks on the Korean Peninsular or anywhere in the world.

After 18-year wait, NSman remembers to return $80 borrowed from officer
Jacelyn Tay shocked that son asks to be caned over nothing
Man taken to hospital after fight that left ground bloodied at South Bridge Road
Netizens laud passenger who returned a stolen blanket to Malaysia Airlines after 9 years
'Sad' Prince Harry says no other option but to end royal role
84-year-old porn star granny enjoying life
Former leading man Ma Jingtao spotted performing at a village wedding dinner
Gambling site promoted by Ah Boys To Men actor blocked
Getting married in a year? You need to save $2,300 a month to afford an 'average' wedding
He's not Malay: Customers surprised vendor at Singapore's Ningxia Night Market speaks fluent Mandarin
Hayley Woo annoyed by people who live-streamed her eating
5 virtual reality experiences in Genting to check out

12 Chinese New Year superstitions to follow for a big dose of luck
Here's what happens to your body when you cut out sugar
Singapore-based netizen shares life-changing hack to reuse those plastic stands in pizza delivery boxes
McDonald's Japan launches its Adult Cream Pies, and the verdict is in

Maid, 34, arrested for attacking employer with knife
Grab driver calls the cops on couple for getting 'intimate' in her car
Sydney mum warns against clothing hooks after 6-year-old gets eyelid torn off
British woman gets schooled on nasi lemak after calling it 'wickedly bad meal'