Will you really go broke if you crash into a luxury car?

With many people proclaiming that this accident would lead to the Toyota driver's financial ruin, we found that the reality is actually the opposite: the financial burden on the driver should end up being the same as if he crashed into a regular car.

Car Insurance Will Cover Most Likely Cover Everything

As long as the Toyota driver had a comprehensive car insurance policy, he should be able to protect himself against the astronomical cost of repairing a car like Lamborghini.

This is because car insurance in Singapore has a third party liability limit of S$5,000,000—around 3x higher than the cost of a new Lamborghini (currently priced around S$1.5 million).

Because it didn't seem like the Lambo was totalled, the repairs of the car will be significantly less than the cost of replacing the car and thus the claimable damages will fit in nicely within the limits of a typical comprehensive insurance policy.

In fact, the Toyota driver could have caused a non-fatal two car pile-up and still ended up paying no more than his standard excess and miscellaneous charges not covered by his policy.

However, There Are Exceptions

While car insurance will cover all the costs of a car accident in most instances, there are some exceptions. For instance, a driver with a COE car insured under a TPO/TPFT plan will have enough coverage to prevent paying out of pocket for the other party's damage expenses, but will still have to pay for repairs for his own car and medical expenses. Depending on the severity of the accident, he could incur high medical bills and costly repairs. However, even this is a moot point, as the driver at fault would have to face his own high medical bills and repairs regardless of what other car he ran into.

The true danger lies in how the accident was caused in the first place. The Toyota driver could end up owing hundreds of thousands of dollars if he was found to be driving in a way that is a violation of his insurance policy (i.e. drink driving) or if he failed to report the accident within 24 hours.

In these cases, his insurance policy will void his claims and refuse to cover damages claimed by the third party. In this case, he may end up owing the Lamborghini owner tens of thousands (if not hundreds of thousands) of dollars for repairs and medical bills, as well as any legal fees if the third party decides to pursue a private settlement. With the cost of repairing a Lamborghini transmission being at least S$66,645, our Toyota driver would owe more than the what the median Singaporean makes in a year.

How Does This Type of Accident Affect Drivers in the Long-Run?

Read Also
Lamborghini wrecked in accident with Mini Cooper and Toyota at Sentosa, 3 taken to hospital 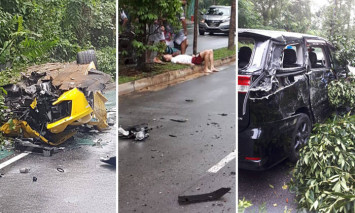 As we found out, with most Singaporean drivers being insured under comprehensive car insurance, crashing into a luxury car has no different financial consequences than crashing into a mid-priced sedan. However, at-fault drivers will suffer from a myriad of setbacks that will affect their budget in the short to medium term. First, their insurance premiums may increase by up to 100% due in part to their NCD discount dropping by 30% and the fact that there was a claim filed.

Second, the driver may face legal fees if the third party decides to sue, which may not be fully covered by insurance (some insurers offer legal fee coverage of up to S$3,000). However, none of these expenses depend on the price of the third party car. So, unless a car costing more than S$5,000,000 was totalled and the third party couldn't file a successful claim and sued directly, the driver's financial liability will be the same regardless of whether he crashed into a Toyota Camry or a Lamborghini Aventador.

This article was first published in ValuePenguin.