SINGAPORE - Media OutReach  - January 16, 2019 - The WOLOT Foundation , (a partner of IBD Technology, a Singapore-based blockchain tech startup) held an official conference on Monday afternoon in efforts to promote and update the public of changes in their joint project and it's future plans. 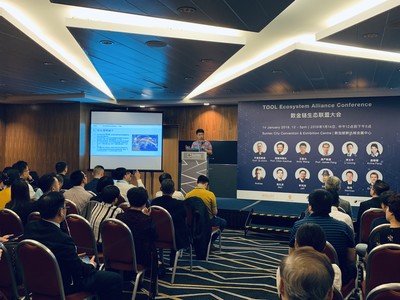 The conference observed an excellent turnout of 80 attendees and started out with talks about the current big data and blockchain development trends in Southeast Asia, presented by prominent figures in China's blockchain industry. Amongst them, the secretary-general of WOLOT Foundation Prof. Patrick Schueffel, envisioned TOOL to be an ecosystem of ecosystems. Associate professor James Pang from National University of Singapore (NUS) also touched on the essentials to evaluating a cryptocurrency's real value. These educational talks then led to comprehensive explanations of TOOL Global's ecosystem, it's business model, and value proposition. Some important updates to note:

In a nutshell, TOOL Global's reward/earning schemes were implemented to foster user motivations in storing the OLO token for future appreciation. Users pledge and freeze a required number of OLOs to qualify as community nodes participating in the TOOL Social Leaders (TSL) program, its mission is to create a decentralized community alliance ecosystem. The development of this ecosystem, its maintenance, promotions, and rewards are centered using the OLO token as its main incentive. It's Super Node program, which includes 2 tiers of nodes: TOOL Block Producer (TBP) and the other TOOL Commerce Node (TCN), was introduced to the project's econet to increase stability and security. Registration for the TBP tier is slated to open this Mid-February, before their Macau conference in March.

About the TOOL Global Project (by WOLOT Foundation)

The TOOL (Global) Projec t is an ecosystem of services which works on a Delegated Proof-of-Stake system where users get rewarded daily based on their level of activity within participating apps and merchants. Advertisers may target their advertisements towards users based on their hobbies, preferences, and reward users global virtual (loyalty) points (BT) for viewing their ads. The ecosystem will benefit users as they enjoy special promotions/discounts from merchants, merchants will benefit from higher customers patronization rates and customer retention rates, and advertisers will benefit from giving ads to users. These in time, will drive demand for the ecosystem's cryptocurrency, OLO.

For more press release information on the TOOL Global, visit www.IBDT.io , or contact Alson/ Lynnette at their respective details below.