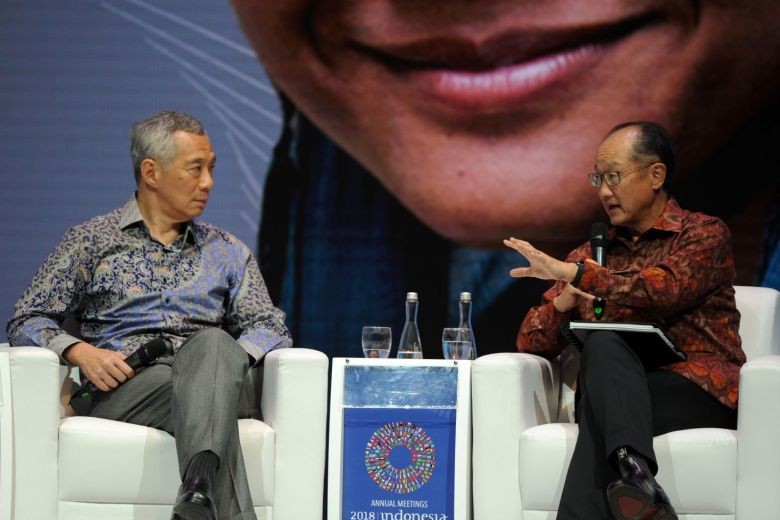 NUSA DUA, BALI - Singapore got its top-of-the-world healthcare and education systems because its leaders took the necessary steps to develop them and not because the country was filled with crazy rich Asians.

World Bank president Jim Yong Kim made the comment on Thursday (Oct 11) at the Human Capital Summit, referencing the popular novel and movie to make a point about how world leaders have to invest more in healthcare and education in their countries.

Mr Kim was speaking at a dialogue with Prime Minister Lee Hsien Loong, who shared some history on the early steps the Singapore Government took after the country's independence to lay the foundation for the Republic's healthcare and education systems.

"The most remarkable thing about Singapore is that this was not a country full of crazy rich Asians 50 years ago," Mr Kim said, to laughter from the audience.

"This was a country that went from having low literacy rates and developing country kind of mortality numbers to where it is now because leaders took responsibility and said, 'We are going to measure it, we will get there and try all the different innovations'."

Earlier on Thursday, the World Bank had launched its inaugural Human Capital Index, which ranks countries according to how well they are developing their human capital based on five indicators: The probability of survival to age five, a child's expected years of schooling, test scores, adult survival rate and the proportion of children aged under five who suffer from stunted growth.

Singapore topped the ranking, with the World Bank saying children born in the Republic today can be expected to fulfil 88 per cent of their potential to be productive when they grow up, given that they get a full education and enjoy good health.

Still, PM Lee noted that "the job is never done" because as the country reaches new levels of development, new expectations and challenges arise.

Take education. Although Singapore has a reasonably good education system, it has to pay a lot more attention to pre-school education, the Prime Minister said.

"Children come at the age of six to school at quite different levels, some able to read, some able to write, but some barely literate or able to recognise letters of the alphabet," he said.

"We want to bring everybody to a good starting point as early as possible in life, regardless of whether you are rich or poor, whether your parents are advantaged or disadvantaged."

In healthcare, Singapore has to focus on step-down care and active ageing so that people stay fit and healthy for a longer time.

"We've got old folks in their 70s and 80s who are learning to dance ballet and doing not badly, and they're much healthier and happier for it," he said.

Mr Kim said it was also "stunning" that Singapore has achieved its current outcomes even though it spends just 4.6 per cent of its gross domestic product (GDP) on healthcare.

The United States, in contrast, spends about 18 per cent of its GDP on healthcare while most European countries spend 10 to 12 per cent.

Yet Singapore's life expectancy at birth is much longer than in Britain or the US, and its infant mortality rate is among the lowest in the world.

Mr Kim also noted that investments in healthcare and education are correlated to economic growth, and called on more governments to step up their work in these two areas.

The Human Capital Index found that around 56 per cent of all children born today will lose more than half of their potential lifetime earnings if governments do not take appropriate steps to prepare for healthy and educated populations.

When asked what countries should do if they wanted to follow in Singapore's footsteps, PM Lee said the starting point for the government must be "that we want to improve lives for all of the population, not just some of it".

"If you do that, then as people's basic lives improve and they have control over their lives, a roof over their heads, they can start thinking about their future and what they want their children to do."