Together We Build a Malaria-Free World

SHANGHAI, April 25, 2022 /PRNewswire/ -- World Malaria Day on April 25, is an occasion that aims to promote global malaria prevention and control. This year, World Malaria Day is marked under the theme "Harness innovation to reduce the malaria disease burden and save lives." Innovation has become the keyword in the fight against malaria worldwide. As the first Chinese brand pharmaceutical product well recognized in Africa, Artesun® (artesunate for injection), self-developed and manufactured by Fosun Pharma, has been used to treat over 48 million severe malaria patients worldwide by the end of 2021, which turned to be a symbol of China's self-developed innovative medicines to the world. 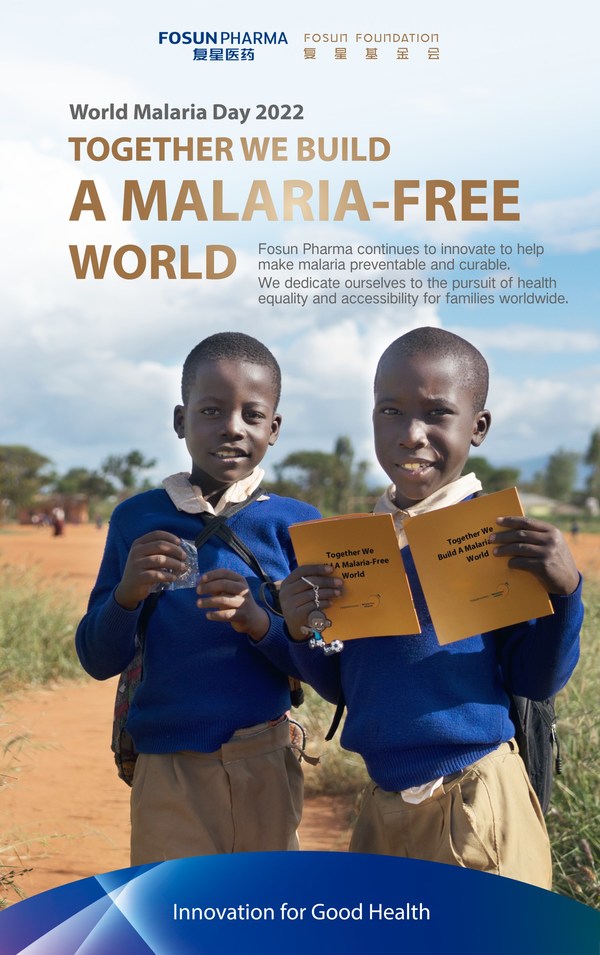 In the 1940s, China reported about 30 million malaria cases annualy[1]. Since August 2016, China has not recorded a single indigenous malaria case, marking a significant achievement in the fight against malaria, which World Health Organization (WHO) hailed as "a notable feat[1]". On 30 June 2021, WHO announced that China was officially certified malaria-free.

The 50th anniversary of the discovery of Artemisinin, a compound helping save lives from malaria around the world

According to WHO, in 2020, there were an estimated 241 million cases of malaria worldwide and 627,000 malaria-related deaths in 85 countries. 96% of which occurred in Africa, with about 80% being children under the age of five[2]. An African child dies of malaria every 55 seconds on average.

Malaria once was a major public health problem in China. In its decades-long battle against malaria, China's continuous and precise prevention and control and its achievements in independent innovation and R&D of antimalarial drugs have made remarkable contributions to the global fight against malaria.

On 23 May 1967, the Collaborative Conference of Researchers on Medicine for Malaria Prevention and Treatment was held in Beijing. Mission 523 has been launched, which focused on the identification of new medicines for malaria prevention and treatment. In 1972, Tu Youyou and her team discovered Qinghaosu or artemisinin (the extracts from Artemisia annua L. / Qinghao) could effectively inhibit malaria parasites, which brought the world a new chapter in the research of antimalarial medicines. Guilin Pharma, a subsidiary of Fosun Pharma joined Mission 523 to further study and develop artemisinin derivatives. Artesunate was chemically synthesized on the basis of artemisinin by Guilin Pharma in 1977. One year after, artesunate for injection was developed, which solved the problem of water solubility of artemisinin compounds.

To help save more lives from malaria, Fosun Pharma takes innovation as its core driver for sustainable growth and continues to improve its products' quality and upgrade its manufacturing management standards. On 21 December 2005, artesunate tablet innovated by Fosun Pharma became the first pharmaceutical product prequalified by WHO, representing a zero breakthrough for the Chinese pharmaceutical industry. At the end of 2010, with the publication of a cover page article in the Lancet on the results of an international clinical trial on Artesun® (artesunate for injection) from Fosun Pharma, Artesun® (artesunate for injection) was also granted WHO prequalification. In early 2011, WHO revised the Guidelines for the Treatment of Malaria, changing the first-line treatment of severe malaria from quinine to artesunate for injection.

The fight against malaria has always been a top priority of China's medical and health assistance to Africa. Since 2006, Fosun Pharma has actively participated in the Chinese government's China Aid antimalaria project in Africa. The company also carried out various public welfare activities and international malaria research cooperation to help improve the local malaria control capacity in Africa. Fosun Pharma has been a core supplier of antimalarial medicines to the Global Fund, UNICEF, WHO, and national drug procurement centers in Africa.

From treatment to prevention, Fosun Pharma continues to provide more prevention and treatment solutions for malaria patients, especially children. In August 2018, Fosun Pharma's SPAQ-CO® Disp (co-packed sulfadoxine-pyrimethamine dispersible tablets and amodiaquine dispersible tablets), which indicated for the prevention of malaria in children, was pre-qualified by WHO (WHO-PQ). By end of 2021, around 175 million children in high malaria transmission African countries had benefited from the "Seasonal Malaria Chemoprevention Program", for which SPAQ-CO® Disp is used as the core drug. SMC with SPAQ-CO® Disp effectively reduced the morbidity of malaria in children under five years old in Africa.

After more than 15 years of operation in Africa, Fosun Pharma has established a sales and marketing network in 39 countries and regions in Africa, ensuring the continued availability of medicine and healthcare products such as antimalarial medicines in Africa.

Since 2020, the COVID-19 pandemic has spread worldwide, which brought critical challenges to the global malaria responses. According to the World Malaria Report 2021 released by the WHO, approximately two-thirds of the additional deaths (47,000) in 2020 were linked to disruptions in the provision of malaria prevention, diagnosis and treatment during the COVID-19 pandemic[3].

As a global innovation-driven pharmaceutical and healthcare industry group deep-rooted in China, Fosun Pharma has actively responded to the call of the WHO. While striving to ensure the antimalarial drug supply to the global market, Fosun Pharma has accelerated the technological innovation of COVID-19 products to secure the supply of relevant materials and strategic products., so as to continuously contribute to the prevention and control of the pandemic.

"Malaria is a global public health issue that attracts extensive concern," said Wu Yifang, Chairman and CEO of Fosun Pharma. "We always adhere to innovative R&D and uphold the mission of helping the world eliminate malaria as our corporate social responsibility. Fosun Pharma's global operational networks will further improve the availability and affordability of antimalarial medicines and other medical products in Africa. In addition, we strive to contribute to the achievement of the Global Technical Strategy for Malaria 2016-2030 proposed by WHO to control and eliminate malaria."

Guided by the 4IN strategy (Innovation, Internationalization, Integration, and Intelligentization), Fosun Pharma will uphold the development model of "innovation transformation, integrated operation, and steady growth", with the mission of creating shareholder values as well as promoting the global networks through strengthening its innovative R&D and in-licensing ability and enriching its product pipelines. Fosun Pharma will actively promote the digital and physical business layout in the pharmaceutical and healthcare industry and is committed to becoming a first-class enterprise in the global mainstream medical and health market.