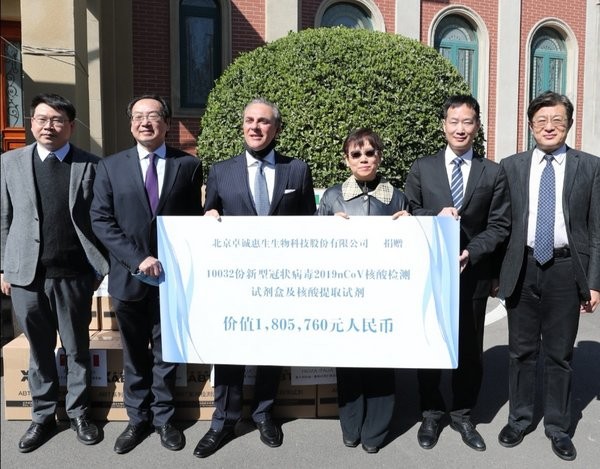 BEIJING, March 26, 2020 /PRNewswire/ -- On March 19, the 2019-nCoV Detection Kit and Nucleic Acid Extraction Donation & Shipment Ceremony was held in Beijing. Beijing Applied Biological Technologies Co., Ltd. (XABT) was invited to the event at which the biologics maker donated an allotment of nucleic acid detection kits that it had produced to Italy. Chinese People's Association for Friendship with Foreign Countries president and China Peace and Development Foundation honorary president Li Xiaolin, as well as Italian ambassador to China Luca Ferrari delivered speeches at the event.

At the ceremony, ambassador Luca Ferrari, on behalf of the Italian government and people, thanked the Chinese People's Association for Friendship with Foreign Countries, the China Peace and Development Foundation and XABT for the sincere assistance they were providing to Italy. He emphasized the phrase "a friend in need is a friend indeed," during his speech. The fact that China and Italy are helping each other in facing the crisis shows the deep friendship between the two countries. With close solidarity, China and Italy will surely overcome the epidemic and do so soon.

Nucleic acid detection is an important detection and screening method for 2019-nCoV used by the World Health Organization (WHO) and national health authorities. XABT, among all the companies that have obtained the registration certificate from the National Medical Products Administration of China for the coronavirus nucleic acid detection reagent, is one of the few high-tech companies producing the rapid detection technology covering three genes, ORF1ab, N and E. The company's 2019-nCoV nucleic acid detection kit (fluorescence PCR method) can achieve up to 99.9% accuracy due to the specific binding at the molecular level. The company has received the ISO13485 system certification, and its products, all of which conform to the CE certification standards of the European Union, are being adopted by more and more countries as a tool to control and prevent the further spread of the virus.