ONO, Japan, Sept. 13, 2021 /PRNewswire/ --  As Japanese farmers struggle to maintain high quality fruit production amid labour shortage, XAG autonomous farm robots are now pitching in to help manage the orchards with high precision. Since XAG unveiled its R150 unmanned ground vehicle into the Japanese market this June, this all-electric, nimble farm helper has been trialled for crop spraying across a variety of orchards such as apple, grape, watermelon, and citrus. 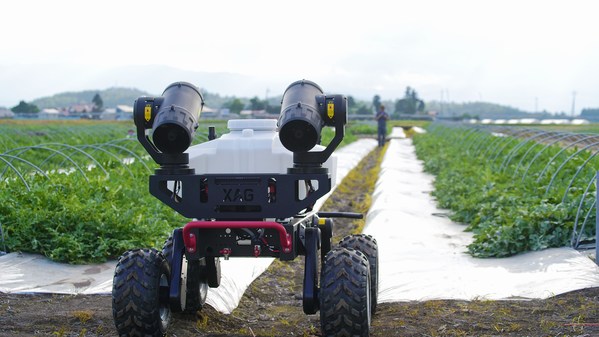 According to the Agricultural Export Expansion Strategy, the Japanese government has established the 2025 export target for 27 products, among which fresh fruits including citrus, strawberries, apple, peaches, and grapes are projected to have significant growth potential. As the strategy calls for modernising farm machinery to enhance production and productivity, robots are regarded as good prospect to help meet these targets.

In Japan's Yamagata Prefecture, one of the four main production areas of the premium grape variety called Shine Muscat, farmers have tested the performance of XAG R150 farm robot on taking care of their vineyards. Traveling easily beneath the horizontally arranged grape vines, this highly agile and powerful autonomous robot can spray bottom-up for grape vines that climbed on overhead trellis.

The large, seedless Japanese "Shine Muscat" grapes has gained momentum and widely exported to other Asian countries since 2007. While Japan devotes 1,200 hectares to cultivate these green premium grapes, the growing shortage of labour in rural area present challenges to meet the export demand.

With a few clicks on mobile app, XAG R150 as a hands-free machine can precisely spray on the crop and ward off pest insects or diseases. This can not only mitigate the impact of rural aging and decreased agricultural workforce, but also reduce adverse health impacts on farm workers who used to bend over with repetitive motions. "It's like a new type of cure to my back pain, I suppose," a vineyard farmer who watched the demo said.

In Obanazawa, another city of Yamagata Prefecture, XAG R150 was also flexibly adapted to watermelon farm and used for watering the melon crops in a field demonstration. The burden of manual spraying and irrigation on slopes have urged Japanese farmers to seek a new approach.

With strong trafficability on tough terrain, the nimble R150 could readily drive between ridges of watermelon field. As this self-driving robot agilely moving forward, water was spread precisely through high-speed airflow from the embarked JetSprayer system, attached on every leaf surface that needs to be cared for.

Japan has a mountainous topography with 60 percent of forest coverage. Because of the scarcity of arable farmland in Japan, the agricultural industry has shifted to a quality-based production strategy rather than a quantity-based model to grow better with less.

In Obanazawa, sophisticated care is taken from seeding, spraying, and fertilising to nurture a perfect fruit, making watermelon cultivation a labour-intensive operation with a dearth of intelligent technologies. Nowadays, it is getting harder to hire sufficient workers to manage the melon fields year by year, with labour shortage being a long-term trouble to Japanese farming.

As an innovative alternative to manual labour, XAG R150 can follow the pre-set route on farm to help fruit growers effectively spray crops and water the field, which reduces the use of pesticides and save water. Watermelons need precision irrigation during their life cycle, and traditionally drip tapes are deployed in the field to secure water supply. However, most melon fields have bumpy terrains and long ridges, making it difficult and time-consuming for farmers to apply and retrieve those tapes regularly.

Japan aims to raise agricultural exports to 2 trillion yen in 2025, followed by 5 trillion yen in 2030. Since the Japanese government is actively supporting smart farming technologies through new laws and regulations, fruit growers in Japan can now expect a scale-up of lightweight farm robots to truly help them grow high-quality fruits with less input.