URUMQI, China, June 25, 2018 /PRNewswire/ -- Hanvan, the heavy truck brand launched by XCMG, the world's leading construction machinery manufacturer, has won the Golden Helmut Medal after 13 days of competition under extreme weather and road conditions at the 2018 Taklimakan Rally (the "Rally"). 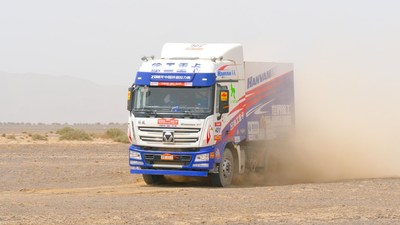 The only truck models in the Rally, the Hanvan Motorcade was made up of vehicles developed by XCMG and Qian'an Jiujiang Motorcycle Club, the largest-scale and highest-ranking team in China. It featured a Hanvan G7 6X4 tractor truck with 500 horsepower, a Hanvan G7 6X4 with 460 horsepower and a G7 natural gas car with 430 horsepower.

"The extraordinary performance of the Hanvan series of vehicles at the 2018 Taklimakan Rally demonstrate the superior quality of our line of products, and their ability to operate in, and conquer, extreme operating conditions. They are shining examples of our 'advanced and durable' gold standard, and also demonstrate XCMG's goal of producing elite products for civilian use," said Donghai Luo, the GM Assistant of XCMG.

"The Hanvan G series heavy trucks have a unique squirrel-type structure with a unibody design of the left and right doors. The models are equipped with bumper beams and strengthened door beams made of 73 percent high-strength plate, a safety standard that measures up to strict European ECE R29 regulations," Donghai added.

Starting in Urumqi, the Rally's route followed the ancient Silk Road and featured 10 stages spread across 2,769 kilometers. Each motorcade completed the journey on the bumpy Gobi Desert under atrociously hot weather conditions while maintaining high speeds and performing a 360-degree spin in the air.

When faced with severe collisions, the heavy truck's leading crash, impact and top pressure resistance capabilities assured the safety of the driver. Developed with a forward-thinking strategy, meticulous management, strong product quality and hardware support capabilities, the new-generation XCMG Hanvan heavy truck brand has been a leader in the industry since its release.

The series also has strong chassis designs that enabled the trucks to perform well in the Rally. XCMG's world-leading chassis manufacturing capability features specialized technology that allows it to design and build a comprehensive product line-up.

Per the company's strong strength in chassis production, XCMG acquired Chunlan Automobile in 2008 to make an entry in the heavy truck sector and established the largest-scale, most intelligent heavy truck factory in China in 2015.

XCMG is a multinational heavy machinery manufacturing company with a history of 74 years. It currently ranks sixth in the world's construction machinery industry. The company exports to more than 177 countries and regions around the world.