Women, notably female politicians, will start to gain greater prominence and control in various professional sectors. It may not be obvious and most activities will occur behind the scenes, says feng shui master Joey Yap in his latest prediction for the Year of the Dog.

This year, female leaders may increase in numbers, although they may not necessarily be at the forefront and might actually be the true power brokers who are exerting soft power.

On top of that, there might be events this year that may not be what they seem, such as political theatrics, fake news and backroom dealings.

"Nothing will truly be as it seems and the more grandiose the show, the more likely it's all for the cameras and the masses," said Mr Yap.

"Both are fighting for their political survival as it is, but one should not be too quick to write them off even if they are no longer occupying positions of power.

"Merkel may not end up as Chancellor, but you can bet she’s going to be playing kingmaker for a good part of 2018 if not influencing policy from behind the scenes," said Mr Yap.

Over in the United States, all eyes should be on Ivanka Trump, who is perhaps the best example of soft power behind the scenes.

In Asia, it will be interesting to see how Taiwan's female president Tsai Ing-wen manages its ties with China - or should all eyes be on the First Lady of China Peng Liyuan instead?

Over in the Pacific, New Zealand prime minister Jacinda Ardern and Australia's foreign minister Julie Bishop are also two influential figures who may have an impact on the policies of the two countries.

US president Donald Trump seems to have favourable stars on his side this year.

Rather than being negatively affected by the Year of the Earth Dog, Mr Yap said Trump may only be strengethened and emboldened. Although the White House will likely continue to haemorrage staff, the president's personal popularity is unlikely to be affected.

Over in North Korea, Kim Jong-un may find that 2018 is not a good year to be roughing things up, said Mr Yap. But there may be a great deal of "noise" being made by the regime and Kim this year - which may indicate more missiles being launched.

Read Also
CNY 2018: Auspicious days and times to start work in The Year of the Dog 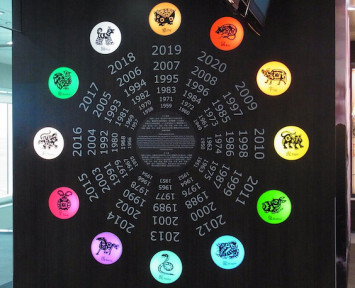 "In 2018, China and US will also likely align more closely to contain North Korea, although China may do more than the US," said Mr Yap.

China may also utilise soft power or subtle influence to arouse domestic unrest or rebellion within North Korea as a way of keeping Kim's finger off the nuclear button.

The wood element is extremely dominant in the Year of the Earth Dog, argubably "out of control", as there is no metal element to keep the wood in check.

But this may not necessarily mean that wood industries, such as education, furniture business, timber or agricultural commodities will dominate this year.

Rather, the 2018 chart contains a solid pillar of earth this year, which looks like a big craggy mountain or grand canyon, interpreted Mr Yap.

"Furniture, chipboard manufacturing, education and upstream timber and agricultural sectors will potentially experience the excitement of new markets opening up and investing enthusiasm. There will also be potentially a lot of corporate activity and fund raising activity, which contributes to a sense of exuberance about companies in this sector.

"But Wood cannot control the Earth. The wealth - be it in the form of income or new capital - cannot be digested. Furthermore, the strength of the Wood element in 2018 is by virtue of strength is from numbers. This denotes popularity, but also intense competition," said Mr Yap.

So while industries such as education, timber, upstream agriculture and commodities, as well as the furniture and chipboard sectors will hog the deal flow headlines and may be popular with investors, the numbers are likely to be pretty rather than profitable.

SO WHICH SECTOR LOOKS PROMISING IN 2018?

The hidden gem of the year, according to Mr Yap's predictions, are water-related industries and businesses, but it will not be apparent until the last quarter of the year, when the water element becomes stronger.

Such industries include be logistics, service industries, beverages and tourism (specifically cruises and water parks).

"International logistics is likely to perform better than regional or domestic logistics businesses. Water-related industries that have  government contracts or who have government links are likely to be more profitable than those servicing purely the private sector. As an outlier idea, wind-powered energy may be something to look at in 2018," advised Mr Yap, who added that progress in the water-related industries will probably fly under the radar for most part of the year.

LACK OF INTEREST IN MAJOR MARKETS AND FINANCE

The metal element is weak this year, so commodities, gold prices, stock markets and currencies are likely to decline or to be depressed, as there may be a lack of interest in these elements of the economy.

"Major markets and giants of finance will not be of much interest, while specialist and exotic currencies as well as gold and precious metals, may remain under the radar or experience little trading or speculative interest," said Mr Yap.

He attributed this to deals that may be done out of sight or in private. He also added that there may be a hoarding of specialist metal commodities or high value currencies.

Mr Yap cautioned that the position of the metal element may merely be hiding within the Dog this year, value and opportunities for wealth still remain present.

"There will be increased volatility and reactiveness in 2018 but this does little to affect the major markets of the world such as the Dow or major emerging markets.

Instead, smaller currencies, mid-cap stocks - everyone who isn’t a big player - will have to endure roller-coasters. Another possible interpretation is that specialist metal commodities or high value currencies will take ‘shelter’ or are shielded by government intervention," said Mr Yap.

Read also: Here are all your Chinese zodiac 2018 forecasts