Yili Group Reports Operating Revenue of RMB 85 Billion in the First Three Quarters of 2021, with a Net Profit Growth of Over 30%

HOHHOT, China, Nov. 12, 2021 /PRNewswire/ -- On October 28, 2021, Yili Group released its financial results for the first three quarters of 2021. During the period, Yili achieved a total operating revenue of RMB 85.007 billion and a net profit of RMB 7.967 billion, representing a year-on-year increase of 15.23% and 31.82%, respectively. Both indicators reached a record high, and the profit growth of more than 30% far outstripped expectations. 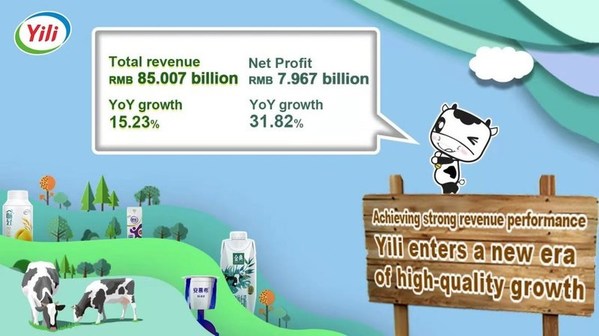 Yili Group reports operating revenue of RMB 85 billion in the first three quarters of 2021, with a net profit growth of over 30%.

Yili's net profit in the first three quarters has exceeded that of last year, signaling a new outlook for the company's growth prospects. The performance also indicated that Yili is now expected to become the first dairy company in Asia to exceed RMB 100 billion in revenue.

As Pan Gang, the Chairman of Yili Group, said, "We will invest more in the tracks focused on new consumption trends and aspire to do our best in each of them. We will also accelerate our digital transformation to boost the overall operational efficiency of the Group, in a bid to achieve our strategic objectives."

Yili has continued to stand out as the pacesetter of the market in liquid milk, ice cream, and other products. Yili Satine Organic Milk, AMBPOMIAL, and Changqing have clinched first place in their respective market segments.

Yili's Xinhuo adult milk powder has led the market segment in sales volume, while Jinlingguan has been the infant formula brand which has seen the most rapid growth in China's market. During the first three quarters of 2021, Yili's infant formula category has reached a growth rate of more than 30% year-on-year.

Yili has proactively enriched categories and its strategic cooperation since the beginning of 2021.

On October 27, 2021, Yili joined hands with goat milk leader Ausnutria Dairy and became the latter's largest shareholder. Ausnutria also features a comprehensive layout in nutrition products and has been licensed with China's quality mark for healthcare products. This will significantly facilitate Yili's future expansion in the health food market.

Yili has established a dedicated team working in digitalization since 2019 and has developed its digitalization-oriented transformation strategy for the next decade, laying out a roadmap for marketing, products and supply chains.

"Digital transformation should be accelerated to ensure our consumer-oriented practice in terms of brand-building and product innovation. That is the major task for Yili in 2021," according to Pan Gang.

Link: http://asianetnews.net/view-attachment?attach-id=407321
Caption: Yili Group reports operating revenue of RMB 85 billion in the first three quarters of 2021, with a net profit growth of over 30%.