PALO ALTO, Calif., Feb. 16, 2022 /PRNewswire/ -- Zendure, a Silicon Valley company that specializes in mobile power solutions and flashy aesthetics, has just released their new Passport III travel adapter on Kickstarter. With four USB-C ports, a USB-A port, and an AC output capable of delivering up to 65W, the company has branded the travel adapter as an "everything charger". 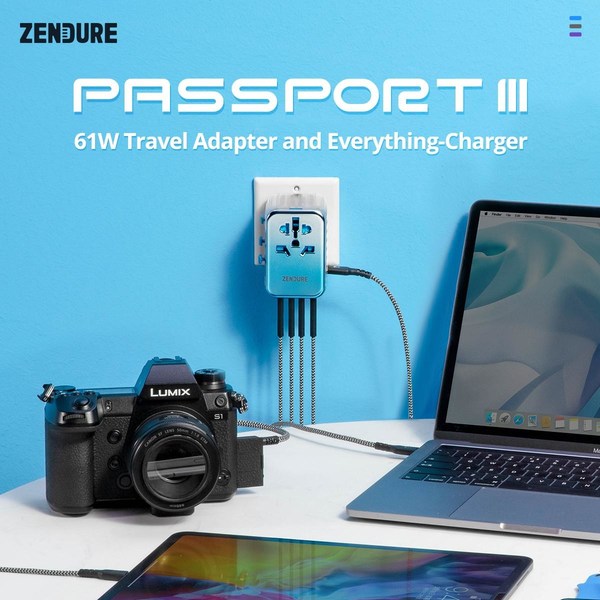 The new Passport III 65W travel adapter can charges 6 devices at a time and features an auto-resetting fuse, GaN technology, and a nostalgia-inducing design.

Like previous travel adapters from Zendure, the new Passport III has an auto-resetting fuse and press-and-slide controls for easy one-handed operation. But in this latest offering, the company has departed from the subdued charcoal and white exterior to add some fun and nostalgia to the design. With a metallic ombre and facebook and translucent enclosure, Passport III evokes design trends from the mid '90s and early '00s.

While the outside of the new travel adapter is a throwback, the inside is 100% modern. The primary USB-C port can deliver up to 65W, enough power to charge an iPhone to 50% in under 30 minutes or fully charge a 13 inch MacBook Pro in just two hours. Passport III uses GaN semiconductor technology to achieve high conversion power in a small form factor without overheating.

Passport III is, ostensibly, a travel adapter. After all, it works in over 200 countries and regions, with a variety of connectors and compatibility with a broad range of voltages. But Zendure has positioned their newest product as an "everything charger", with the potential to replace numerous proprietary charging bricks, whether you're in the home office, at the coffee shop down the street, or halfway around the world.

Zendure is an outdoor consumer electronics company located in Silicon Valley in the United States and the Guangdong - Hong Kong - Macao Greater Bay Area in China. Zendure has continuously launched innovative products, made rapid breakthroughs in the core technologies of outdoor energy storage and power supplies, and continues to bring pleasant surprises to the user experience. The company recently received a multi-million dollar series-A round of funding from a joint investment from Shanghai GP Capital and YOTRIO group.