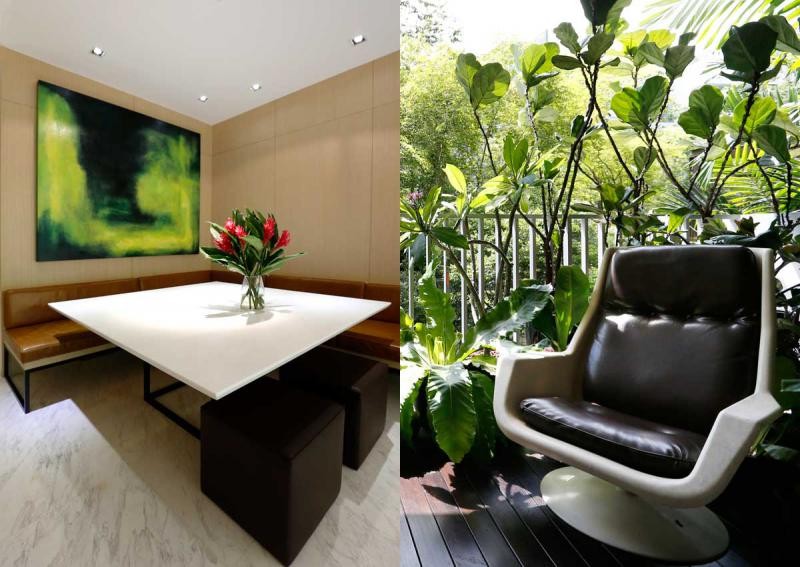 With its spick and span appearance, and nary a chair or painting out of place, you would think that Winnie Chan and James Quan, founders of Bynd Artisan, only moved into their home recently. But the couple and their two teenage kids, Vera and Josh, have lived in this 1,900 sq ft apartment in Upper Thomson for the past four years.

"It looks new because we are seldom home," quips Ms Chan. Mr Quan jokes that if visitors were to look closely, they would be able to see a well-worn path leading from the entrance to the bedrooms.

The couple usually leave home at 6.30am to drop the kids off at school before heading to work in Boon Lay, and they are only back after dinner.

The family decided to move here a few years ago when they were offered an irresistible price for their previous home. "We decided not to move out of the Thomson area since we both grew up here, and we wanted to be near my mum," says Ms Chan.

Mr Quan says that if he wasn't in the book binding business, he could have become an interior designer, because of his strong interest in the subject. He picked the apartment because he liked the layout, and chose a unit on a lower floor. "We would be able to look out onto the trees if we stayed low and have our privacy too," he says.

Ms Chan chimes in that "the air at the balcony is fresh in the morning, and sometimes we see birds flitting about".

When it came to the interior design, Ms Chan had only one criteria. "The apartment had to be easy to clean and maintain," she says, leaving the task of designing the home to her husband. She only saw the apartment when it was completed.

Mr Quan worked with Museum ID on the design, based on clean simple lines that are everlasting and functional to make the weekly cleaning routine simple. The walls are clad with wood laminates to not only provide a warmer ambience to the apartment, but to ensure easy cleaning too.

Since no one in the family is a fan of dust, storage spaces are mostly concealed. This also applies to the space under the couple's bed, which is a storage space. "There's no need to clean under the bed this way," says Ms Chan.

Over in Josh's room, his collection of model cars, which he has been collecting since he was five, are kept in a glass display cabinet, again so that dust doesn't get in. "For the same reason, you don't see many objects such as photo frames lying around as that makes our weekly cleaning easier," says Mr Quan.

And with Mr Quan's foresight, there are no tight corners in the house that make cleaning a nightmare.

"Our built-in furniture is at a precise distance from the wall, so that the wiper duster fits perfectly into those tight corners," he says. He also opted to have the apartment's brand new floor tiles replaced with marble ones, again for easier maintenance. Marble has thinner grout lines than tiles, says Mr Quan. "Plus, the cool marble floor and warm wood walls complement each other."

Most of the furniture in the home was customised so as to maximise space and also to create a coordinated look, such as the L-shaped settee at the dining area.

One precious piece of furniture that the couple have is a lounge chair from the 1970s, that used to belong to Ms Chan's mother. "Winnie's mum fed her in that chair, and she did the same for our kids when they were babies, so this is a real heritage piece," says Mr Quan of the chair, that is still in good condition.

While they keep their home mostly clutter-free, there are touches that turn an otherwise empty shell into a home.

For example, a painting by Singaporean artist Andre Tan hangs on the dining room wall, adding shades of green to the otherwise light brown walls. Mr Tan is known for his signature pop art and cartoon superhero art pieces, but Mr Quan commissioned him to do a piece that is completely different from his usual style. "The only brief given to Andre was that the piece should be in green to give a calm and relaxing feeling to the home," says Mr Quan.

On display in the living room is a cast iron sculpture of a horse, which Mr Quan says is his favourite birthday present from his kids some years ago, as his luck changed for the better after receiving it.

In the walkway to Josh's room is a poster from the recent 1001 Steidl Books at Deck exhibition. Gerhard Steidl is an advocate of paper and analog print in today's digital world. Says Ms Chan: "He is a man I have looked up to for many years as an industry leader and spokesperson when everyone else was calling bookstores a dying species. His passion, clarity and focus in what he does inspires me greatly."

The poster features the letter Q, which is also the family surname Quan. "'Q' is Steidl's favourite letter and he noticed that designers always take particular effort to make it beautiful. For him, Q looks like a drawing or a mythical symbol that allows creativity in typography," says Ms Chan.

Despite not getting to spend much time at home, the couple each have their own favourite spots.

For Ms Chan, it is the study, where she spends a lot of time. For this reason, the room is filled with her stuff, such as a range of items that inspires her, alongside her well organised files and cherished books covering different genres from thrillers to design, business and history.

For Mr Quan, his favourite area is the balcony, where his penchant for gardening is obvious. He has green fingers and loves tinkering around in the garden and is always moving his plants such as the ficus and frangipani around and trying new configurations.

"The grooming of plants parodies life," he says. "They are always a work in progress, different strokes for different folks and extremities often produce bad results."

This article was first published on June 18, 2016.
Get The Business Times for more stories.