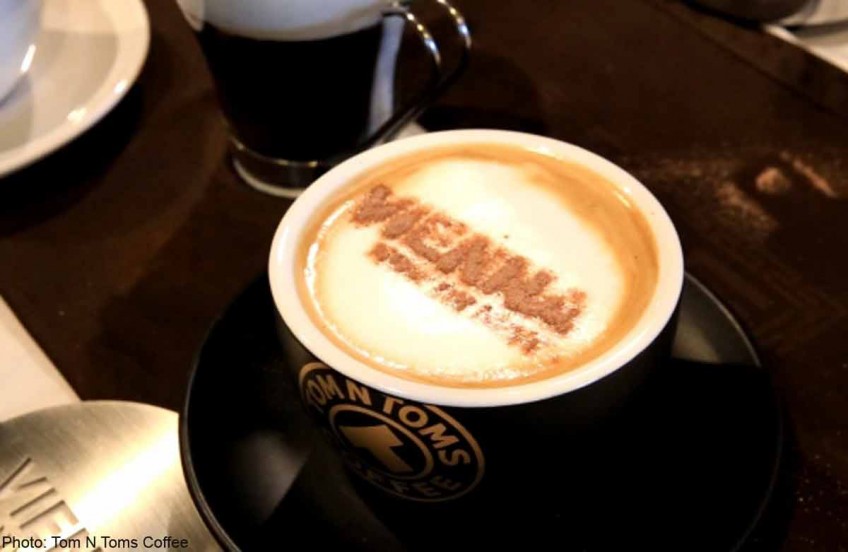 Koreans drink more coffee than they eat kimchi, it seems.

The average Korean drinks 12.2 cups of coffee per week, which makes for about two cups a day, while kimchi is consumed 11.9 times per week, according to a report last year by the Ministry of Agriculture, Food and Rural Affairs and Korea Agro-Fisheries and Food Trade Corp.

The brown brew has become the go-to drink for any occasion in Korea. A convenient table accessory at meetings, an easy excuse to chat with coworkers, and an accessible stimulant for the busy modern Korean, coffee can be found in many forms and varieties in the market today.

Instant coffee, locally known as "coffee mix," is a staple of Korean offices and homes.

Affordable and devilishly saccharine, instant coffee was estimated to account for around 39.2 per cent of the domestic coffee market in 2013, according to the MAFRA report.

Coffee can also be found in canned forms and tea bag-like pouches in Korean convenience stores.

Jardin, a Korean coffee company founded in 1984, had the idea of delivering relatively fresh quality coffee beans to consumers at an affordable price through sachets of ground coffee powder, ready to be soaked and steeped in hot water.

"I drink all kinds of convenience store coffee, especially during exam periods," said Kim Yea-ji, a 23-year-old university student. "It's tasty, cheap, and it does the job of keeping me awake."

On the other end of the spectrum are consumers who are well versed in the subtle tastes and different origins of coffee beans. For such sensitive palates, some cafes offer a range of rare blends, roasts and customised options.

The Australian Paul Bassett and local coffeehouse chains Holly's Coffee and Cafe Dudart are among the brands preferred by those who seek a high-quality coffee experience.

"We have our own roasting factory and co-operate with qualified baristas," said Kim Young-han, R&D deputy head of Cafe Dudart. "Each cup of our coffee is a carefully measured blend of Brazilian, Guatemalan and Ethiopian beans."

Hand-drip, Dutch and single-origin coffees are sold at some Cafe Dudart stores as well. Brazilian coffee is favoured by those who are partial to a nutty, low-acidic flavor with a chocolatey aftertaste. The Kenya AA, on the other hand, has a more fruity scent. Dutch coffee, which is made in a slow, hours-long cold-brewing process, is mellow and aromatic.

Some coffee shops are diversifying their menu with different espresso-based drinks.

The third-most popular coffee at Tom N Toms' Cheongdam store, Vienna coffee is steadily gaining recognition among customers, said deputy chief of marketing Kim Seung-hee. The frothy drink is made by floating a generous swirl of whipped cream on top of your average Americano. The whipped cream can be substituted with fresh cream according to taste.

Cafe Hooamdong, a small coffeehouse run by Kim Seung-hee in Seoul's Huam-dong, offers espresso con panna, which features a whirl of whipped cream on top of a regular espresso.

"It adds a nice creaminess to the bitter espresso, which makes it more popular," said Kim. "I find that Korean customers take their coffee sweet, as opposed to most Europeans.

"The majority of our coffee orders are still Americanos or lattes," Kim added. "But we're seeing more and more customers who ask for other mixtures."

Butter coffee ― made by electrically blending hand-drip coffee with butter from grass-fed cows and coconut oil ― has also been garnering attention among some adventurous coffee enthusiasts.

Its inventor, Dave Asprey, has dubbed the drink "bulletproof coffee," claiming it protects the body from negative side effects, such as heartburn and tremors, that are often caused by regular coffee. Butter coffee also optimizes cholesterol levels with healthy fat and pumps out a steady supply of sustainable energy, claims Asprey.

A handful of bloggers described the novelty coffee as "surprisingly tasty," "different" and "creamy."