Cake in a shake 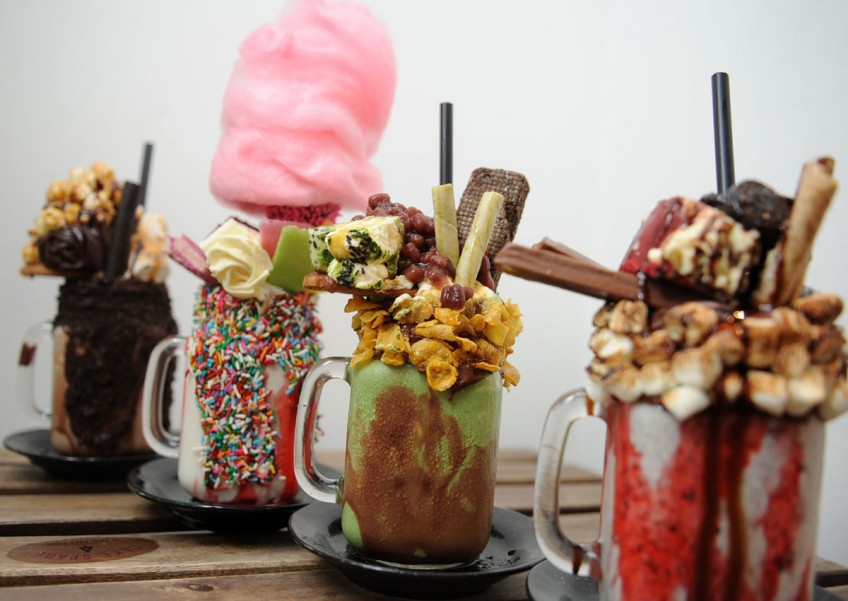 Ten months in, one can safely declare 2015 the year of desserts.

From eclairs to fancy soft serves on waffles, to churros and Thai-style coconut ice cream, dessert lovers are devouring these offerings - and working off the sugar high by posting photos of their just-devoured sweet confections on social media.

And now, enter the cakeshake.

A decadent ice-cream milkshake, stacked with cake slices, candy floss and marshmallows, this attention-grabbing treat in a glass jar is said to have originated in Australia.

A bakery-cafe in Canberra, called Patissez, is credited for sparking the trend in July, when it started selling the cakeshakes it dubbed "freakshakes".

Since then, the craze has spread quickly across Australia.

Cream is whipped until it is stiff, and forms the layer between the ice-cream shake and other ingredients. That way, the wafers and cake do not sink too quickly into the drink and turn soggy.

Chocolate bars or biscuits are strategically placed as well, to prop up cake slices. Customers wait at least 10 minutes for their orders. The menu has four flavours, priced between $14.90 and $16.90.

Ms Ng says: "We made sure that every element in the cakeshake complements one anther, and tweaked the flavours many times so that the shakes are not too sweet. The cakeshakes are also a good way to introduce customers to our cakes."

On weekends, Cake Spade sometimes sells as many as 40 cakeshakes a day. Occasionally, they sell out way before closing time.

Over at Forum The Shopping Mall, The Benjamins (01-20/21, 583 Orchard Road, shakes available from noon daily, or until sold out, tel: 6887-4117), formerly known as Benjamin Browns, also sees strong demand for its vanilla bean ice-cream-based shakes ($16 each).

She can easily sell up to 200 glasses a day on weekends.

On top of their more classic flavours such as Nutella Banana and Cookies & Cream, The Benjamins also has more trendy ones such as Thai milk tea, with coconut ice cream; Milo Dinosaur; and coffee avocado, that comes topped with sliced avocado as well.

And while Ms Tan is planning more trendy flavours - a twist on the mango pomelo sago dessert from Hong Kong is in the pipeline - she also hopes that the hype does not overshadow the bistro's food.

She says: "When we introduced the shakes, we did not expect such hype. Once it dies down, we hope people will come back for our food and cakes."

For diners, it looks like the craze is far from over.

Mr Lew Choon Hock, 31, a biotechnologist who was with his three colleagues, was excited to try the cakeshakes at Cake Spade.

After polishing off two cakeshakes, Mr Lew declared to Life: "I want to lick the mug. We didn't know where to start eating at first, but that's also what makes it fun to eat.

"But I need to head to the gym after this."

Student Sherine Lim, 19, says: "I have seen many pictures of the cakeshakes and I had to try them with my friends at The Benjamins. I like that they have trendy flavours such as Thai milk tea. It's a bit on the sweet side, but I like it that way."

When ice-cream gets 'fried'

If a cakeshake is too much for you to handle, perhaps the other hot ice-cream trend would be easier to manage.

Known as ice-cream rolls or "fried" ice cream, the dessert has its roots in Thailand, where it is served as a popular street snack.

A mix of cream and milk is poured onto a flat frozen surface, and toppings are chopped up, smashed and mixed with the slightly hardened cream using two trowels.

The cream mix is spread across the surface in a thin sheet, then rolled up like love letters and carefully placed in a cup.

Chocolate sauce or additional toppings may be drizzled or sprinkled on top. The whole process takes about two to three minutes.

American ice-cream parlour Cold Stone Creamery's method of mixing ingredients with ice cream has a similar concept, but with a different presentation.

Over the last six months, at least five shops selling these Thai-style ice-cream rolls have opened.

"But I think it's worth the wait because they take the time to mix the ice cream in front of us. It's fun to watch them, and my 11-year-old younger sister is fascinated by it.

Go Frost's owner Muhammad Hilmi Zakariyah, 25, got the idea for his business after watching a viral video on how the ice cream is made.

He says: "Many Singaporeans had watched the video and the response was amazing. So I thought, why not give it a shot based on the demand and start the trend here?"

He opens a second outlet at East Village later this month.

"We always encourage customers to try adventurous pairings, instead of sticking to safe options such as vanilla ice cream and Oreo cookies."

On weekends, the two-month- old outlet can sell 200 cups a day. Besides the common ice-cream base, he also offers yogurt and Yakult base, and is looking to add toppings to the menu next month.

He says: "Prior to frozen yogurt and rolled ice cream, there was the waffle craze.

"We still see a lot of shops serving waffles, but many have closed.

"Only a handful serving quality waffles are trying to stay afloat. Singapore is a very small market."

Having said that, Coyoro's third outlet at Bugis Street will open by the middle of this month.

This article was first published on October 04, 2015.
Get a copy of The Straits Times or go to straitstimes.com for more stories.