Call me, call me, on the line 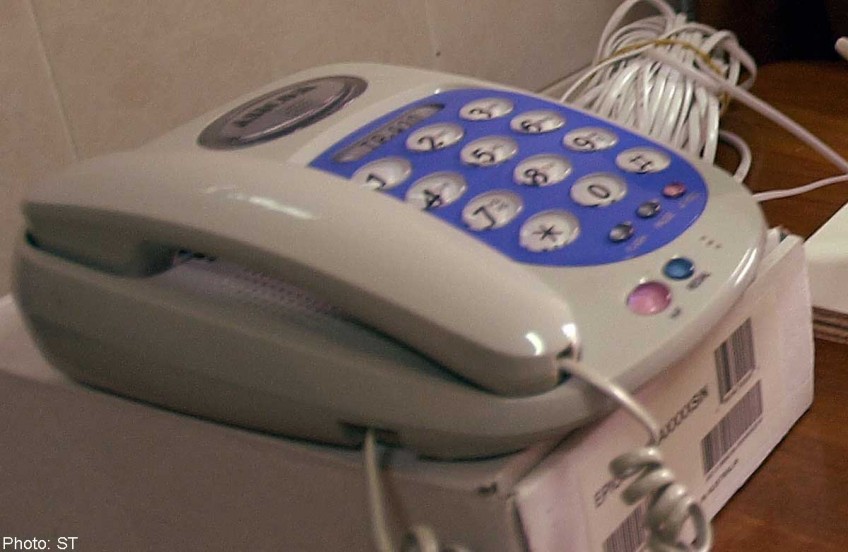 I have a love affair with my land line.

You know, the phone line that comes out of a wall socket. The kind that rings insistently, refusing to cough up the identity of who is calling, until you run - or trudge - over to pick up the receiver and interrogate it. The kind that forces you to stand in one spot to conduct your call, like a weary heifer, lifting first one leg, then the other.

I know I'm an anomaly in an age when the death knell for land lines has sounded. Earlier this month, the United States Centers for Disease Control and Prevention released a report which found that more than 40 per cent of American homes do not have land lines.

In Canada, last year, 21 per cent of all households relied solely on their mobile phones - rising from only 8 per cent in 2008 - government statistics showed.

In Singapore, the total number of fixed-line subscribers has dropped to 36.4 per cent of the total population, based on Infocomm Development Authority of Singapore figures for the first half of this year. This is down from around 45 per cent a decade ago.

But I have no intention of giving up mine.

For me, the mark of true friendship is when home phone numbers are exchanged. My longest-lasting BFF, whom I've known since we were 11, calls my mobile phone but always prefaces her calls with: "Are you at home? I call your land line?" I know what she really means: "Settle down and get comfortable, we're going to do some major catching up."

When I need some advice or to rant, I dial my wise friend W's unlisted phone number that connects me directly to her bedroom and she indulges my still-adolescent need to po tin wa zok (Cantonese for "boil telephone porridge"; a telephone marathon).

And, once a week, I call my mother on her land line just to chat. I stand next to my boxy 1980s-esque black-and-maroon telephone - with the words "Quality Living" printed in cursive at the bottom; a cheap-o-la model bought from the hypermart. I have the handset clamped to one ear and a hand on one hip. As we talk, rapid-fire, about her grandkids, I imagine her standing similarly next to her phone - a boxy design like mine, only in black - in her kitchen, toying absent-mindedly with the keys splayed on the counter ledge.

The wanton availability of mobile phone numbers these days amounts to a kind of promiscuity. You give out your mobile phone number without a thought to people you meet. But exchanging home phone numbers is like wooing someone and then taking her home to meet the family. "Hello, may I speak to so-and-so, please?" "Please hold on." "Sure, I'll wait." Such effort, anticipation and sincerity. I suspect the generations down the line, who take for granted that their WhatsApp messages will always magically find their way to the intended recipient, will never get to practise this little ritual of civility. "It's me, __________", you might say, announcing your name to the person you're speaking to, without the know-it-all caller-name-flashing of smartphones. A non-land-liner will never taste the particular pleasure of affirming one's identity and existence anew with each phone call.

I still remember the phone numbers of old friends that I have punched in countless times. Each string of numerals is a little map, a route criss-crossing the number pad. Long after my friends have married and moved out, I still find it comforting to dial those numbers and speak to their parents, asking for their offspring's latest contact details.

In a way, holding onto one's land line in today's wireless world may have something to do with the desire to stay anchored. Moored, somehow.

My friend L, an academic based in London, wrote in response to my straw poll that she maintains a land line partly because "it feels kinda nice to be able to call home and know you're really calling home". I imagine a wire running underground and across oceans, connecting her to Singapore all the way from England. I imagine her calling her parents' house here and the telephone ringing in the exact spot it has always been, where she used it on her last visit home. Her phone line is a physical connection - a thing that ties her, this bubbly balloon of a woman, to an actual piece of property, a geography, in the land of her birth. She'd put her finger on how I felt.

"Home is where the digits are," I wrote her back.

I'm not the only one pining inexplicably over land lines.

Last year, The Washington Post reporter Dan Zak wrote "a love letter to land lines" on the 40th anniversary of the first mobile phone call on April 3. "The curly-cue cord itself was indispensable; how else could one communicate anxiety over an important grade-school social matter if not by twirling one's fingers into a knotted mess?" he wrote. "Am I alone in suffering from this type of nostalgia? (Can you hear me now?)"

And American author Rainbow Rowell's new novel Landline, published this month, is about a woman who discovers a magical land line that can connect her to her estranged husband in the past. The novel has been well-reviewed and talked about - a sign of hope for land-line loyalists, maybe?

One more anecdote before I get off the line, then.

A few years ago, the phone in the first flat my husband and I bought together started ringing early in the morning. He padded to the study to answer it, and then I heard him speaking excitedly to the other party. It was his long-lost grade-school friend from Australia: Philip was in town for a few days and had tracked his classmate down simply by looking up the residential phone book. That night, after a few decades of radio silence, they caught up over dinner - a reunion impossible if we had cut our fixed line.

Like I said, you've just got to love the land line for facilitating true friendship.

Do you have a land line and how often do you use it? Write to stlife@sph.com.sg