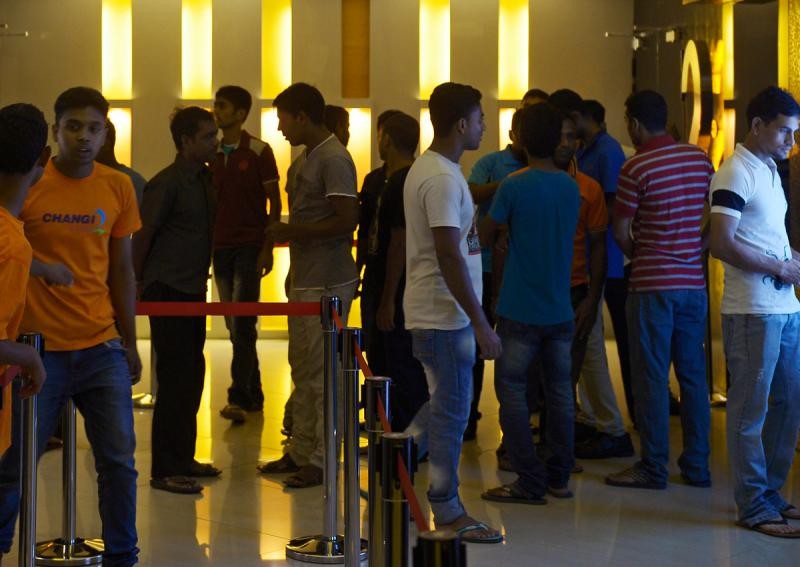 With an economic slowdown looming, the Migrants Workers' Centre (MWC) is calling for companies that are laying off their foreign workers to try and get them re-employed with other firms, rather than just sending them back home.

Noting the plight of these workers, the centre's chairman Yeo Guat Kwang said some of them have paid hefty fees to agents to come here, and many may already have the relevant skillsets and job competencies to continue working here.

A foreign worker advocacy group, MWC is an initiative of the National Trades Union Congress and the Singapore National Employers' Federation.

When cases are brought to the centre's attention, it will work closely with the Ministry of Manpower and groups like The Singapore Contractors Association (Scal) to re-deploy them, said Mr Yeo.

He said he would also like to urge employers who are still recruiting to consider workers who have been laid off, rather than taking new workers from the source countries.

The centre has already had "a few cases" of employers coming to them for help to re-deploy their workers, said Mr Yeo, and he expects more to come forward.

"Foreign workers are always the buffer - they are here to complement Singapore's workforce. Whenever there is a downturn, or economic slowdown, the foreign workers will definitely be the first to go," he added.

"As we are now in the midst of seeing economic development slow down, the worry is that there will be quite a number of layoffs, as the companies scale down," he said.

He believes the construction, marine and metal work sectors will be hit hard.

The call by the MWC to re-deploy retrenched workers is one which Scal president Kenneth Loo agrees with. "Some are experienced, so we don't have to train them again. It's good to keep the skills in the economy," he said.

Mr Loo said this is already happening , with the Foreign Construction Workers Directory System - an online portal launched in October last year to match workers whose work permits are about to expire with prospective employers.

Both Mr Yeo and Mr Loo were speaking on the sidelines of the finals of the Scal Cricket Challenge Cup, which was held for the seventh year running.

A total of 322 participants took part in the event held yesterday and on Sunday at Scal Recreation Centre in Soon Lee Road. The tournament featured 23 teams from 18 companies.

Mr Andrew Khng, director of Tiong Seng Contractors, which has taken part every year, said cricket helps to build bonds between workers in the company. "I think it (builds) cohesiveness and teamwork. Out in the field, you need to communicate - this is part and parcel of how a project site runs."

This article was first published on May 3, 2016.
Get a copy of The Straits Times or go to straitstimes.com for more stories.