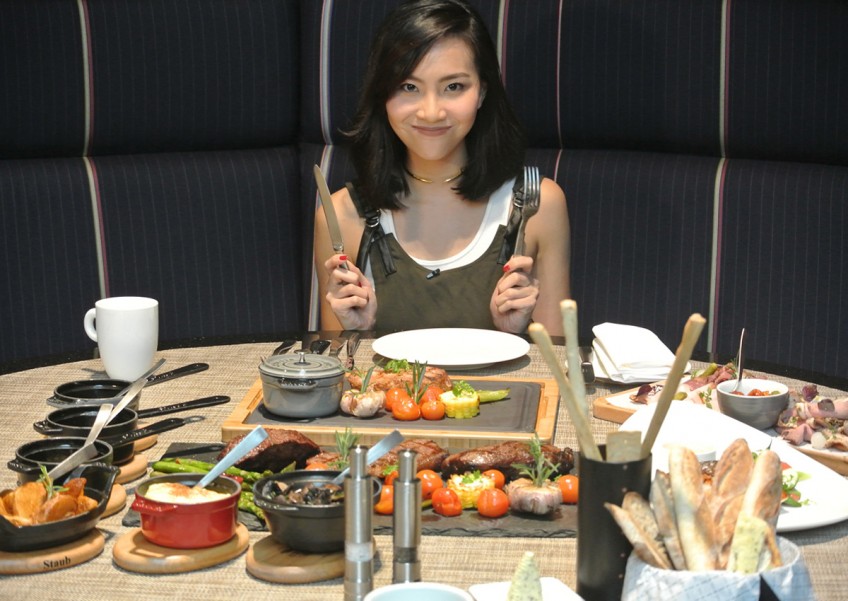 Hosting a food show may bring Sonia Chew closer to finding a husband.

The local actress-host's latest gig is presenting You Think You Know? Food In Singapore, where she visits expats' homes and learns to cook traditional dishes from countries like Turkey, Russia and Vietnam.

It airs on Tuesdays at 8pm on Channel 5.

"My family used to say, 'You can't cook or clean, so how are you going to get married?'" the 24-year-old, who is currently single, told M.

"But by the time I finish filming, I would have learnt to cook 13 different kinds of cuisine. That means I can marry a guy from any of these cultures," Chew said with a laugh.

For our interview, she chose to dine at European restaurant Ash & Elm at InterContinental Hotel because she was impressed by their food the last time she visited.

"A friend recommended this place as it was new. I remember the salmon was really delicious," Chew said.

"I like the decor and ambience here; it would be a good place for a date, especially at night."

"I like the pork chop best because it's got a lovely charred taste, kind of like char siew without the sweet honey glaze," she said.

"It also has a great umami flavour. And the salmon tastes really good with the grapefruit hollandaise, which has a nice mixture of citrus and creamy flavours."

How well do you know food after hosting You Think You Know? Food In Singapore?

I used to claim I was a big foodie, but that just means I eat a lot. Doing the show has really expanded my knowledge of food from different cultures.

Previously, I didn't really cook much, so part of the fun of watching the show is seeing me mess up in the kitchen... I have been terrified of big knives and fires!

The whole show was like a crash course in cooking for me.

What was the most difficult dish you had to tackle?

On the Austrian food episode, I had to cook Tafelspitz (a slow-cooked beef broth simmered with carrots, potatoes and bone marrow) for two chefs from (German and Austrian restaurants) Brotzeit and Kaiserhaus.

I should call it Tough-elspitz as it was so difficult to make. It took three hours to produce the broth and side dishes like creamed spinach, rosti (fried potatoes) and horseradish sauce from scratch.

To my surprise, the chefs actually said it was good.

You're also starring in web series A Selfie's Tale with Ah Boys To Men hunk Joshua Tan. Did you often eat together?

We did go out for meals. I remember one time we went to MEATLiquor for burgers.

Most of the time we would eat production food together, but because Joshua was on a diet (he usually eats vegetables and soup), he used to watch us with hungry eyes as we ate char kway teow and Scissor Cut Curry Rice.

Sometimes, he would even leave the room because it was so tough to watch us eat.

What is your least favourite food?

I would never eat pickled pigs' feet or haggis (sheep innards minced with oatmeal, onion, fat, spices and salt and encased in a sheep's stomach).

To me, that's like a lot of disgusting stuff all put together.

And I once turned down the chance to host a TV show on exotic food because I would have needed to eat insects, and I have a phobia of them.

This article was first published on February 24, 2016.
Get The New Paper for more stories.