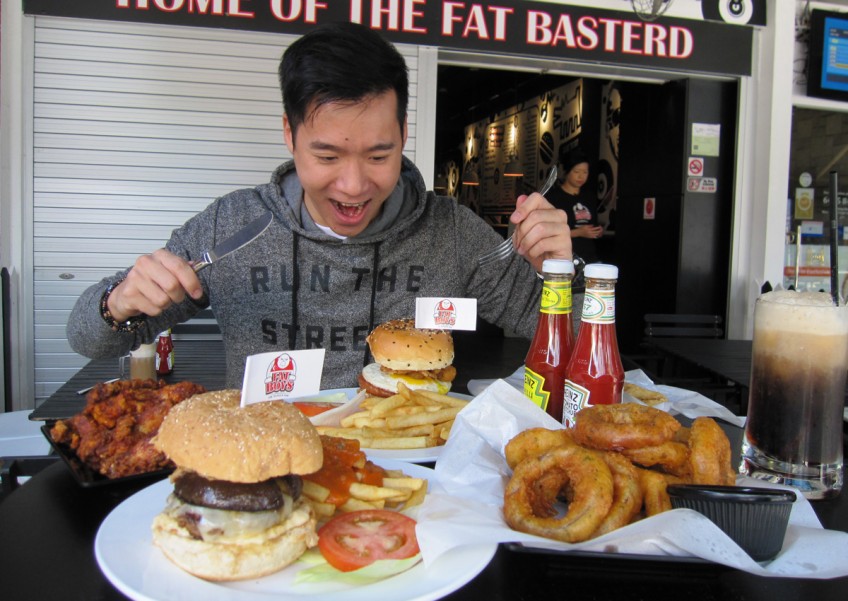 It is easy to make Joshua Tan's day - just give the dude a burger.

The 25-year-old Ah Boys To Men star loves burgers so much that he would make his own during his university days in Australia. He graduated with a communications degree from Melbourne's Monash University last year.

"I cooked a lot when I was in Melbourne and one of my favourite combinations was burgers and chips," the local actor said.

"I gained a lot of weight there. I think I went a bit crazy.

"When I'm having a burger, I'd just hold it with my fingers and bite right into it. Things will get messy, but I can't be bothered about image when I'm eating something so delicious."

We were tucking into juicy beef and pork burgers, calamari, spicy drumlets and beer-battered onion rings at Fatboy's The Burger Bar at Holland Village, a regular hangout for Tan and his friends.

He said with a laugh: "This would be the perfect place for a first date. It'd be fun to see how she tackles the (messy) food."

Tan is starring in upcoming Channel 5 drama Lion Moms, which premieres on Sept 14 at 10pm.

After that, there's local cosplay-themed movie Young & Fabulous, slated for a year-end release.

In it, Tan, who is co-managed by JM Artiste Network and FLY Entertainment, plays a street-smart teenage student.

The best thing about both projects?

He was no longer Ken Chow the recruit, thus marking the end of a torturous diet which he had to go through for the successful Ah Boys To Men army flicks.

"After the Ah Boys films wrapped up, I dropped from 75kg to 70kg, losing 5kg of muscle mass," he recalled.

"While I was happy that I could eat whatever I wanted, I felt xin tia (Hokkien for heartache) that my six-pack abs I spent a year working on were now gone!"

Would you say you have the best bod out of your Ah Boys peers like Tosh Zhang, Wang Weiliang and Maxi Lim?

It's hard to say what's the ideal bod. Some girls prefer guys with slim, lean bods, some prefer them with more meat, some like six-pack abs, some don't. It's hard to choose. (Smiles.)

Who is the biggest foodie among the Ah Boys?

Oh, all of us like to eat, but we love different things. Tosh is into Japanese food. Weiliang, predictably, likes local food. I am more of a Western food person, and Maxi, well, he eats everything. That's why he is so "muscular". (Laughs.)

Tell us more about your regular eating habits. Are you the health-conscious sort?

No, I'm a foodie. (Laughs.) I'll cheat twice or thrice a week and on other days, I'll eat normal stuff like economy rice and chicken rice. I will not do extreme diets or cut out carbs completely. I can't tahan (Malay for tolerate) things like that. I don't believe in taking vitamins or supplements either.

Besides burgers, what other dishes can you do? Are you a good cook?

My cooking is quite good! Nobody has got food poisoning before. (Laughs.) I've been cooking for some time. Before I went to Melbourne, I used to cook with my girlfriend, it was like our hobby. When I was studying in Melbourne, I had a lot more free time, plus eating out was expensive, so I cooked often. My specialities were shepherd's pie, lasagne and pasta.

What is your favourite Australian delicacy that you miss?

I miss Melbourne's chicken parma. It's a slab of chicken breast, breaded and fried, topped with cheese, tomato, chips and mushroom sauce. It's super Aussie.

This article was first published on September 2, 2015.
Get The New Paper for more stories.