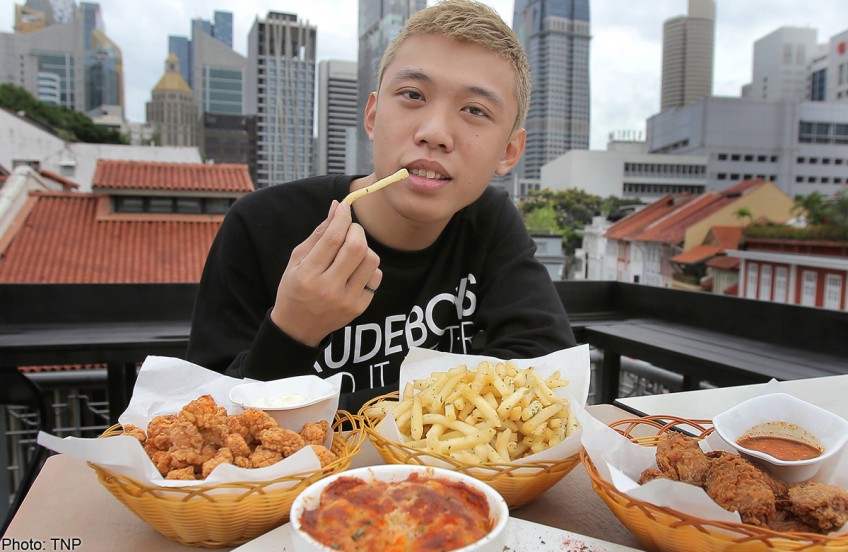 Much of Wang Weiliang's success comes from his rugged heartland appeal.

Over dinner with M last Friday at Club Street rooftop eatery FRY Bistro (owned by actress-comedienne and Fly Entertainment boss Irene Ang), the 27-year-old breakout star of local hit movie series Ah Boys To Men professed that if not for his fellow Ah Boys, he would never have ventured into a plethora of hip restaurants and cool cafes.

"If I'm eating alone, I'll just eat at a hawker centre or kopitiam. I hardly ever dine at Western (food) establishments," the local actor said in Mandarin.

"I like to pair my food with chilli padi. I guess I'm old-school in that sense."

A few weeks ago, his Ah Boys To Men: The Musical cast mates took him to PS.Cafe in the Dempsey area.

It was his first visit and the eatery's food left him in awe.

"Everything is just so nice, whether it's the fries, cheese, chicken tenders or desserts," he said.

When told that the PS. Cafe eateries are a favourite among girls, the bachelor said with a laugh: "Now that's something I should definitely take note of."

Wang will next be seen in the new local film The Lion Men: Ultimate Showdown, which opens here on June 12. It is the sequel to director Jack Neo's lion dance-themed movie The Lion Men, which ran during Chinese New Year.

Wang, who is co-managed by JM Artiste Network and Fly Entertainment, said that he started hitting the gym and doing weights training filming The Lion Men in his bid for a fitter frame.

"For a while, I managed to get six-pack abs. Recently, I've been quite lazy. So now, I only have a four-pack."

What are some of your favourite hawker dishes and haunts?

I like practically everything at Old Airport Road Food Centre. The char kway teow, chicken rice and Western food stalls are very good. I especially love the chocolate avocado there, it's so sinful but very nice.

I also like the chicken rice on the fifth floor of Far East Plaza and the laksa at Queensway Shopping Centre. (Ah Boys To Men actor) Tosh (Zhang) introduced the laksa place to me.

Any food that turns you off?

I cannot take soupy stuff. I don't like fishballs that are dipped in soup, yong tau foo soup or steamboat.

Oddly enough, I can stand things like bittergourd and hairy gourd, which put some people off.

Before you hit the big time with Ah Boys To Men, you once worked as a singer in a bar. Do you hold your liquor well?

I hold my liquor just all right. I like beer, not so much wine.

When you're working in nightlife, it's more important to know the techniques of "evading alcohol". Inevitably, there will be many customers who want to drink with you. For me, whenever I hear someone say, "Come, lai yi bei" (Mandarin for 'have a drink'), I'd reply: "Okay, hang on, let me go over there first." The next thing I know, when I've returned to his table, the person would be drunk.

Sometime back, I was with the cast of The Lion Men in Shanghai promoting our movie. Our female lead Eva Cheng, who was born in Hangzhou, took us to eat sheng jian bao (pan-fried pork dumplings) at this restaurant called Xiao Yang Sheng Jian. They were really delicious.

When I was in Taiwan, I liked the oyster mee sua and deep-fried cheese potato.

Does Maggi noodles with egg count? (Laughs) I can't cook, lah. I'm a responsible man - I spare my family members the agony of eating the food I cook.

This article was first published on May 28, 2014.
Get The New Paper for more stories.