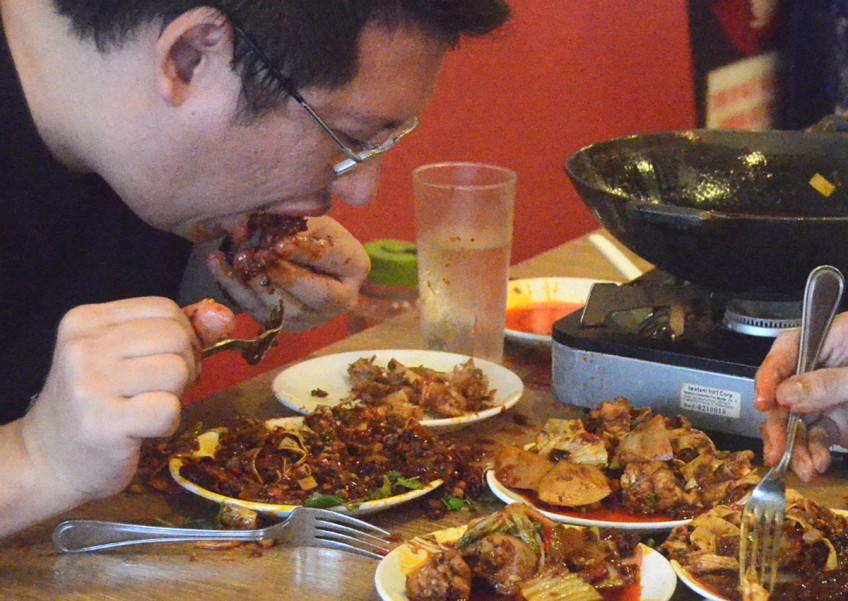 They wolf down the entire hotpot in 5min 47sec. Throughout the messy chaos of used utensils and splattered gravy, Mr Kent Phoa is sweating and tearing up.

The 40-year-old IT consultant is panting as he tells The New Paper on Sunday: "My mouth and lips are burning, but I feel great."

The tag team challenge involves polishing off an entire hotpot of piping hot food as fast as possible. The ingredients in the hotpot include chicken, Chinese cabbage, bean curd and a lot of cut chilli.

Fat Bird's supervisor, Mr Gerald Khoo, 26, says he has never seen such experienced competitive eaters before. He says: "Once the timer starts, they hurriedly use two plates to scoop the food out of the hotpot onto another plate.

"I am struck by their speed and strategy."

Mr Phoa and Mr Ng are part of a community of over 20 competitive eating enthusiasts.

Mr Ng says: "We are all friends who share the same hobby. We meet about once a month to participate in food challenges."

But a specialist cautions that speed eating can be dangerous. (See report on facing page.)

Which is probably why the duo had to sign an indemnity form before taking up the challenge. Not that it deters Mr Phoa.

He explains that he focuses his training on eating speed.

"Once a week, I eat six hot dog buns in 60 seconds to train my chewing ability," he says.

Mr Phoa participated in his first eating competition in 2003. But it took him five years before he was able to do it as a serious sport.

He says: "I was shopping at the then Compass Point Shopping Centre when I came across the Major League Eating Asia 2008.

"I walked in to register and surprisingly, I was one of the finalists. It was then that I realised I was quite good at eating competitively."

Winning the Fiery King Challenge gets him $600 worth of dining vouchers, but Mr Phoa says he does not care for the prize or the money.

"Because this dish is newly launched, the food challenge was started to attract customers to try it," she says.

Safety precautions are in place during the competition. She says: "The staff keep a close watch on the participants throughout the challenge to ensure their safety. They are also instructed to call for an ambulance should any accident arise."

Another competitive eater is Zermatt Neo.

The 28-year-old personal trainer made the news earlier this year for eating a near-4kg portion of chicken rice in slightly over 29 minutes.

Mr Neo has his own YouTube channel, which is filled with videos of his competitive eating experiences, including gobbling up, in separate sittings, 150 sticks of satay at Lau Pa Sat, 100 gyozas at home and 50 chicken wings at WingStop - all to challenge himself.

He has even travelled to Malaysia, Thailand and the Philippines to compete.

In a previous interview, he told TNP: "Most of the time, I don't even know what the prize is. I do it for the fun of it and bragging rights."

Even so, Mr Neo doesn't encourage others to take part in competitive eating.

He says: "It is pretty high risk, and you can choke and feel sick. I've learnt a few tricks to make it easier for myself, like taking small, quick bites and washing it down with water."But vomiting and competitive eating go hand in hand. Sometimes your body goes into shock and just can't accept all the food you've eaten."Of Mr Phoa, Mr Neo says: "He is dedicated to the sport and will even study the food he is going to eat for an upcoming challenge.

I really respect him as my senior in competitive eating."

Wolf down this whopping 1kg burger (above) made of six wagyu beef patties, six slices of cheese and streaky bacon in 20 minutes and the burger is free.

Plus, your picture will be on the restaurant's Wall of Fame.

There is also a spicy version, the Red Hot Terminator Burger.

Participants who complete the challenge in 25 minutes will get an additional $20 voucher.

This is no ordinary plate of spaghetti - it is so spicy that the restaurant requires you to sign an indemnity form before taking up the challenge.

Chow down on the Spaghetti from Hell in 10 minutes and you can choose your prize - two towers of beer or a $100 dining voucher.

The towering burger in this challenge feeds four adults, but only one person can take part.

The burger is made up of humongous portions of fried chicken, layered with pork and beef. The meal also comes with a big bucket of sweet potato fries.

Finish everything in an hour and your feast is free. Only two winners have graced the restaurant's Wall of Fame since the challenge started two years ago.

Dietician: Don't do this as a hobby

The stomach can digest only so much food at one time, cautions chief dietitian Gladys Wong of Khoo Teck Puat Hospital.

When told of The Fiery King Challenge before the competition, she tells The New Paper on Sunday: "We can only hope (the competitors) will not scald themselves or choke on the food."

The oesophagus is a canal which connects the throat to the stomach.

Ms Wong adds: "In severe cases, this can lead to an infection of the oesophagus."

Ms Wong explains: "Weight gain takes place gradually over the years. If someone takes part in a food challenge just once, they will probably just experience diarrhoea or vomiting after (the challenge)."

Despite that, Ms Wong does not recommend competitive eating as a hobby.

She adds: "These restaurants should have an ambulance on standby at all times. It is dangerous and silly to be doing this as a sport."

Top competitive eaters in the world

RECORD Mr Stonie, who is from San Jose, California, is ranked the No. 1 competitive eater in Major League Eating, an American sports franchise that oversees professional competitive eating events.

The 23-year-old weighs only 58.9kg and has his own YouTube channel documenting his competitive eating experiences.

His achievements include eating 182 strips of bacon in five minutes and 4.5kg of spaghetti in eight minutes.

RECORD Ranked second in the League, Mr Chestnut, 31, is also from San Jose.

He holds 40 world records for competitive eating, including eating 141 hard-boiled eggs in eight minutes and 6.2kg of pork rib meat in 12 minutes.

RECORD The top female competitive eater, Ms Sudo, 29, who is from Las Vegas, weighs only 54.4kg. But do not underestimate her - she has wolfed down giant meals, including 192 chicken wings in 10 minutes and 3.9kg of kimchi in six minutes.

This article was first published on May 1, 2016.
Get The New Paper for more stories.