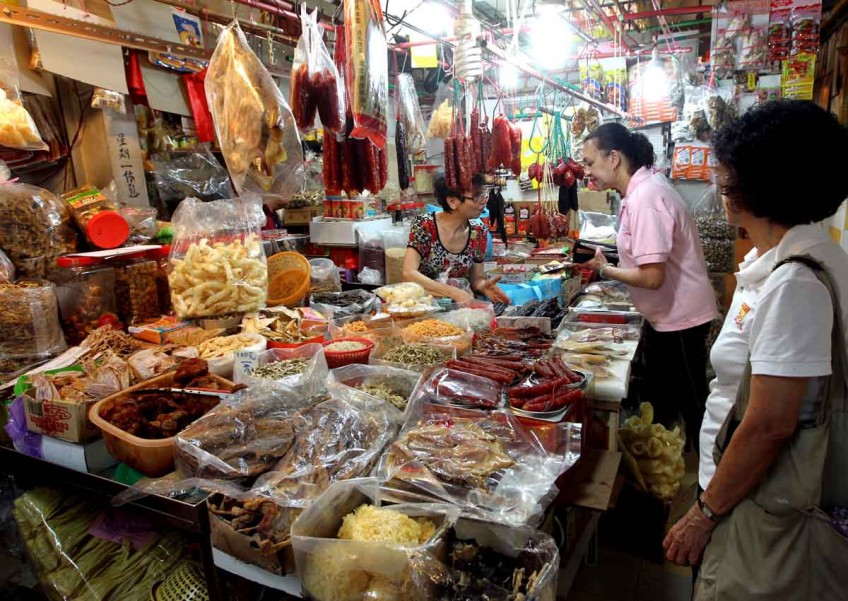 Fans of abalone have an extra reason to look forward to this Chinese New Year, as certain brands of the delicacy have dropped in price by up to 15 per cent.

There has been a global fall in demand for the sea snails, particularly in China, where a corruption crackdown has curbed the appetite for expensive banquet foods.

At Singapore supermarket chain Giant, a can of New Moon Abalone from New Zealand costs $33.80, down 15 per cent from $39.80 during the same period before Chinese New Year last year.

A can of Calmex abalone at Teck Yin Soon Chinese Medical Hall in Temple Street starts at $145, down from $158 last year. This is the second consecutive year that its prices of abalone have fallen.

Prices of delicacies usually peak a month before Chinese New Year, which falls on Feb 8 and 9 this year.

Teck Yin Soon's owner Chow Khai Cheng, 60, said: "The corruption crackdown in China has pushed demand for abalone down, and prices too."

But prices of other reunion dinner favourites such as fried fish maw and dried scallops are up 5 per cent to 40 per cent, a check with retailers and wholesalers found.

The ocean-warming El Nino weather phenomenon and overfishing have resulted in a lower supply of fish maw, according to retailers.

Bee's Brand Birds Nest and Health Products in Smith Street is selling locally-produced fish maw at $450 per kg, up 5-10 per cent from last year.

The rising cost of fish maw is one reason why the 23-year-old Ban Yoo Foh Medical Hall in Sago Street stopped selling it last year.

At On Tai Ginseng Traditional Medical Hall in South Bridge Road, 100g of dried scallops from Hokkaido, Japan, now costs $25, up from last year's $18 - an increase of nearly 40 per cent.

The rough sea conditions overturned seabeds, burying scallops in sand and choking them to death. The resulting lower supply pushed prices at his store in Victoria Wholesale Centre up by 40 per cent.

Prices of other Chinese New Year favourites, such as dried mushrooms and dried sea cucumbers, have remained constant.

Housewife Lynda Yeo, 56, bought frozen scallops this year because they are cheaper than dried ones. But she is not scrimping on fish maw, which she bought in December.

She said: "My family is so used to eating fish maw for reunion dinner. Anyway, it is only once a year, so it is okay."

This article was first published on Jan 17, 2016.
Get a copy of The Straits Times or go to straitstimes.com for more stories.