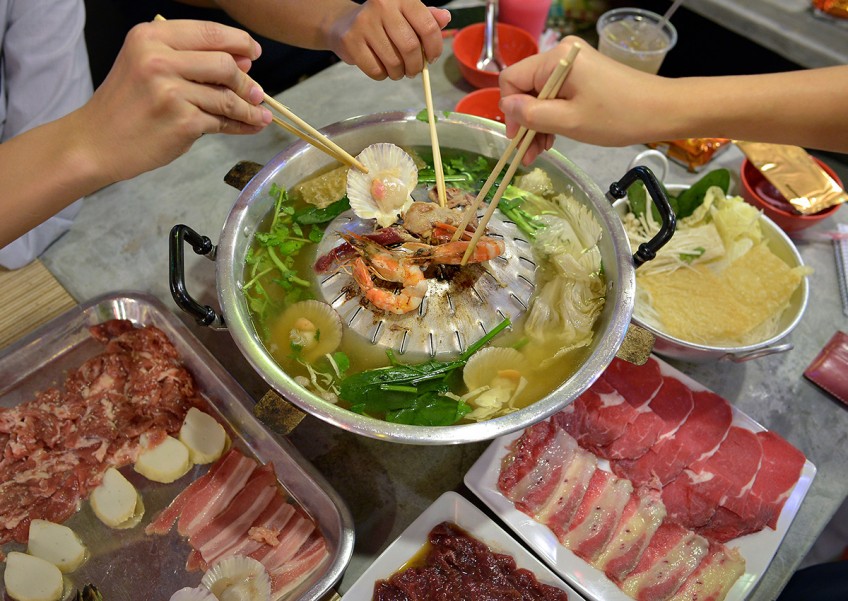 The brand's flagship shop for South-east Asia will be located in Ion Orchard at B4-33.

The cheese tarts originated in Kinotoya, a Western confectionary in Hokkaido, Japan. Bake was set up in Tokyo in 2014 to reach out to a larger clientele.

In food-mad Singapore, foodies are always on the lookout for new treats. We look at 11 food fads that invaded the scene in recent years.

The buttery pastry has a crispy exterior, and is filled with an oozy salted egg yolk custard.

It was first created at Urban Bakery Works in Hong Kong in September 2014 and became an instant success.

That meant of course that shops in Singapore soon offered their own take on the pastry. It can now be found in French-inspired patisserie Antoinette (priced at $6.50 each) and Italian deli chain Da Paolo Gastronomia ($6.90 for each croissant).

On March 11, local bakery chain BreadTalk debuted its miniature version of the treat. Its Golden Lava Croissant is a bite-sized snack which costs $1. If you feel like one is not enough, you can get seven croissants for $6 and 12 croissants for $10.

The Sunday Times did a blind taste test in February and the winner was Antoinette's croissants.

The Straits Times food critic Wong Ah Yoke's verdict on the winning pastry: "I like the crispy ends and the pastry has a balanced butteriness."

The Cronut, a hybrid croissant and donut, was created by French chef Dominique Ansel at his eponymous bakery in New York.

It debuted on May 10, 2013, and became an instant foodie sensation on Instagram, attracting long queues.

The pastry is fried in grapeseed oil, rolled in sugar, filled with cream and topped with glaze, according to the company's website.

Queues at the bakery usually start an hour before it opens at 8am from Mondays to Saturdays and 9am on Sundays.

Originating in Korea, the seafood tower features up to nine layers of steamers stacked on top of each other.

The bottom layer is filled with a soup base while the tiers stacked on top each contain a different variety of seafood, ranging from crab and squid to scallops and mussels. Juices from the seafood drip down into the soup, making it more flavourful.

It is available at Captain K Seafood Tower and House Of Seafood.

House Of Seafood launched the seafood tower on June 2015. All servings come in eight tiers, but the portions may differ. The largest portion ($438) serves eight to 10 people while the smallest portion ($228) serves four to six people.

Captain K Seafood Tower offers a nine-tier deal ($288.90) for eight people. The smallest seafood tower ($52.90) has three tiers and is meant for two.

Fried Korean chicken is known for its thin, crispy skin and moist meat.

The Korean fried chicken wave stormed New York in 2007 and arrived in Singapore shortly after.

Kko Kko Nara, one of the first Korean restaurants to become famous for its Korean fried chicken, sells a whole chicken for $30.

Many other restaurants, such as casual dining chain Chicken Up, have joined the bandwagon. There is even a home-grown brand, 4 Fingers Crispy Chicken, which opened in November 2009. It sells Korean-style fried chicken drumsticks, starting from $9.45 for three pieces.

Jenny Bakery, an institution in Hong Kong which opened in 2005, is known for its amazingly buttery cookies and flavourful coffee cookies.

Mr Lawrence Lim, 49, managing director of Jenny Bakery Singapore, told The Straits Times his reason for choosing a heartland location: "I chose Ang Mo Kio and not Orchard Road because I wanted to start with the heartland. I want Singaporeans to experience the cookies first-hand."

They are made without genetically modified ingredients and preservatives.

According to CNN, the popular belief is that the egg-shaped mould was invented in the 1950s by Hong Kongers to make up for the eggless batter. At that time, eggs were expensive as World War II had just ended.

In Singapore,the eggette is available (from $2.20) at Niceday Dessert, a dessert shop selling Hong Kong and Taiwanese street food.

Chun Shui Tang Cultural Tea House in Taiwan is widely believed to be the birthplace of bubble tea. The beverage was invented in 1988 by Ms Lin Hsiu Hui, product manager for the company. Bored during a staff meeting, she had poured her snack, fen yuan, or tapioca pudding in Chinese, into her tea.

"Everyone at the meeting loved the drink and it quickly outsold all of our other iced teas within a couple of months," she told CNN.

Bubble tea first came to Singapore in 2000. However, the food fad did not last, with demand for the teas, topped up with tapioca pearls, herbal jelly and pudding, waning after three years.

But just when you thought the fad had dried out, a new wave of bubble tea returned to the market offering quality teas and a wide range of toppings.

Taiwanese brand Gong Cha, which means "tribute tea" in Chinese, has the tagline boast, "fit for an emperor". It first came to Singapore in November 2009.

Rival bubble tea shop chain Koi, which launched in Singapore in 2007, offers unusual flavours such as Yakult Green Tea ($3.50 for the smallest size). Its beverages are priced from $2.20 to $6.10.

This is the ultimate decadent ice-cream milkshake. Created in Australia, this dessert comes in a glass jar, with generous toppings of cake slices, candy floss and marshmallows.

Patissez, a bakery-cafe in Canberra, started selling oversized milkshakes with brownies and Nutella in July 2015.

Thick honey toast stands out from the crowd with its height. It is topped with decadent portions of whipped cream and ice cream.

Also known as Hanito in Japan, it originated in Tokyo's Shibuya district.

The toast gained a Singapore following in 2013, with the support of hipster cafes like Nam's Brewing Thai Tea & Coffee in Amoy Street and Watanabe Coffee in Chinatown Point.

This includes Taiwan's Dazzling Cafe, a casual cafe chain that opened its first Singapore outlet in April 2015. Prices for its thick honey toast range from $16.90 to $19.90.

Bingsu is the Korean version of ice kacang. Like the beloved local dessert, the Korean treat comprises finely shaved ice topped with ingredients such as red beans, condensed milk and red beans.

Madam Yun Bo Yong, 44, directing manager of Bing Go Jung in Guillemard Road, said bingsu started in the Joseon Dynasty (1392-1897) in Korea. The king owned ice houses (called Binggo) and he would give military officials ice as a treat. They would crush it and eat it with fruits.

Local versions come with toppings like oreos and ice cream.

Mookata is a cross between the steamboat and the grill.

The word mookata is Thai, with moo meaning "pork" and kata meaning "skillet".

It is a dome-shaped grill with a soup trough placed over charcoal embers.

There are a few origin theories, with some tracing mookata's history back to Korea.

Huay Kwang Thai Kitchen's owner Patrick Ong, 37, whose wife is Thai, told The Straits Times: "What I understand is that during wartime, hungry soldiers in Korea cooked raw meat on their helmets. The Thais adopted this for their version of the grill and added a soup trough."

Having lived in Bangkok for more than 15 years, he said: "I wouldn't term it as Thai cuisine. It's just that Thais like to have barbecue and sukiyaki when they dine out. Thai businessmen thought up this concept to kill two birds with one stone."

The trend caught on in Singapore in early 2014, with multiple eateries offering different options, such as Charcoal Thai's Mookata Set ($39.95) for two to three people and Happy Mookata's buffet sets at $25.90 per person.