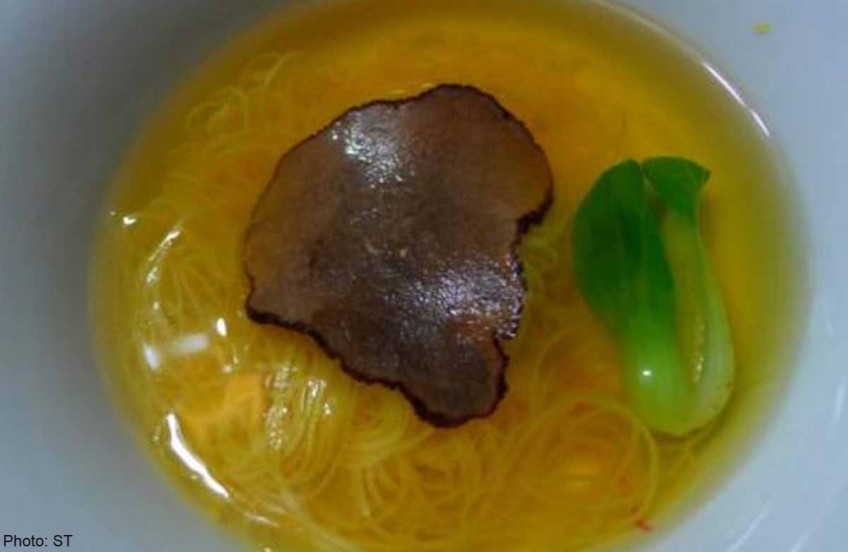 Before this year, what I knew of Chengdu was limited to the facts: It is in Sichuan province in China and the research centre for pandas is located there.

But a few months ago, my friends and I heard of a private-dining restaurant called Yu Zhi Lan that had garnered rave reviews in newspapers such as The Financial Times. More research and recommendations from friends led to the discovery of other similar restaurants there.

That was how I ended up in Chengdu six weeks ago with reservations at three private-dining restaurants.

All of them are tiny and reservations are a must. But they are truly a revelation of how far the culinary scene in China has come.

Kuanxiangzi is an alley of old houses that were the homes of imperial officials during the Qing Dynasty. The houses have been conserved and converted into upmarket shops, restaurants and cafes.

The entrance to Zi Fei is nondescript, with only a small plaque next to plain wooden doors to announce its existence to passers-by. But behind those doors is a wondrous restaurant that weaves in artistry, elegance, good taste and skill.

A passageway lined with Buddha figures, and lit by a huge cane lamp in the shape of a fish hanging from the ceiling, leads to a dark courtyard. Our spacious dining room, one of 16 of various sizes, is up a short flight of stairs on one side of the courtyard.

It is furnished with a round table and a sofa set on one side, where you can lounge with some snacks and drinks before dinner. I suggest you skip them because you should leave room for the meal.

There is no menu. You choose the price to pay, which ranges from 480 yuan (S$105) to 3,000 yuan a person. Depending on your choice and the number of people in your party, you are served a series of dishes - which may change the next time you dine there. The restaurant takes reservations for groups of two and more.

The person in my party who made the reservation had thought we would be served the 1,800-yuan menu and no one thought to check before dinner. Chengdu was a second-tier city in China after all and 1,800 yuan sounded pretty expensive.

So imagine our shock when we got a bill of 3,000 yuan each after the meal. But after we visited the other restaurants, we conceded that expensive as it was, it offered better value than another place we dined at, considering the finesse of the presentation and the fine cooking.

The menu for my party of six comprised more than 20 items.

Cold starters such as pickled chillies and cold spicy chicken with peanuts and spring onion were served on ceramic platters attached to court servant figurines, which was a nice touch. But they were just a harbinger of the artistry in the presentation of the dishes that was to come.

An icy landscape with a tiny thatched cottage and a live plant formed the backdrop for a dish of salmon-cucumber rolls and raw organic carrots, asparagus and ladies fingers.

Then, a bonzai appeared, with two plates of stir-fried beef under it. Little animal figures such as swans, pigs and a porcupine occupied the landscape, while red and beige flowers sprouted from the plant's branches. After we finished admiring the artistry, we were told everything in the dish - other than the wooden part of the plant and the red flowers - could be eaten.

And they tasted good too, especially the flowers, which were deep-fried prawn paste studded with almond "petals". The well- marbled pieces of beef, cooked medium and plump with juices, were excellent too.

Next, the server placed a potted plant on the table. The plant was at one end of the pot and a small trellis of cherry tomatoes trailed across the surface of the soil. What do we eat here, we wondered. Raw tomatoes or do we spoon the soil into our mouths. The plant itself, a Guan Yin bamboo, did not appear to be edible.

Wait, the waitress said, when we peppered her with questions. A few minutes later, she returned and started to dig up the soil, which she pointed out was a mix of cocoa powder and flour. A buried treasure was soon revealed: a bowl of thick vegetable broth with corn kernels, diced mushrooms, peas and beans sealed in aluminium foil. But alas, after all that to-do, it tasted rather mundane.

More surprises came in the shape of a treasure box. One by one, its drawers were pulled out to reveal dishes such as fried macadamia nuts, scallops in fish- flavoured sauce and roast pigeon. The pigeon was exceptional - aromatic, juicy and meaty.

A set of Chinese brushes and ink was next. But a closer look showed that the brush tips were actually fried pastry and the ink was blueberry sauce. And the pastry was filled with lotus paste.

Another illusion came near the end of the meal, when what looked like a normal pork dumpling was wrapped, not in dough skin but a paper-thin slice of fish.

Aesthetics were useless if the food was not good, but Zi Fei did both well. Flavours were well-balanced and except for some of the cold starters, there wasn't any of the fiery and tongue-numbing sensations of typical Sichuan cuisine.

The meal was ridiculously expensive at more than $650 a person, but it was a work of art. And how do you put a price on art?

Yu Family's Kitchen takes up half the space of a rented house in another lane of old houses that have been converted into cafes and restaurants, including a Starbucks.

The six dining rooms are located on two floors on one side of a courtyard with a pavilion, where an overfed cat was taking its midday nap while we lunched and a mynah in a cage outside chirped "ni hao" (Mandarin for "how are you?") whenever anyone approached it.

When we arrived, the table was laid with 16 square plates of vegetarian cold starters, arranged in the centre in a symmetrical pattern with the bright colours of ingredients such as celery, pumpkin and tomatoes forming a pretty mosaic.

To start off the meal, the waitress swiftly rearranged them into groups of four, like she was working on a puzzle. But it was no random arrangement. Each group paired spicy dishes, such as celery with mustard oil or century egg in chilli oil, with mild items such as dried steamed egg or deep-fried mushroom to douse the fire on the palate.

Then came the individually plated dishes, which were not as elaborate as those in Zi Fei, but still with more thought to visual appeal than the plating at Yu Zhi Lan.

In fact, we got the same Chinese brushes as those at Zi Fei, except here the pastries were filled with pork floss and the ink was strawberry sauce. Red ink was used by royalty, explained the server.

Some of the other dishes looked simple, but were very refined in how delicate or exquisite the flavours were.

An example was the steamed chicken and shark's fin, with the comb of fins floating in clear broth like an open blossom. What looked like normal chicken broth was lightly spiced with pickled chilli, giving it just enough heat to tickle the palate without overpowering the chicken or the fins.

A piece of steamed local river fish was served in its own broth, which was sweet with the flavour of seafood. We were urged to drink up the soup, then add ginger and vinegar to the fish for a different sensation.

Next came a tiny porcupine, actually a dough dumpling filled with red bean paste. The dough had been cunningly cut with a pair of scissors to produce the spikes.

More dishes followed, most of them excellent: stewed whole abalone stuffed with minced beef, bird's nest with pumpkin and crocodile cooked with radish in a milky broth.

The only hiccup was a dish of pan-fried Australian beef cubes served with sauteed mushrooms and asparagus that the server confessed, in an embarrassed tone, was concocted for the Western diner.

The meal ended with a Sichuan classic, a soup called water-boiled cabbage but was actually a tasty clear broth brewed with chicken, duck and ham, into which a head of baby cabbage was added. The version here was exquisite.

Like the other meals we ate in Chengdu, there was no dessert, but we were so full after more than 20 dishes that it was not missed.

The RMB1,000 (S$217) meal was worth the price, but unless we make another trip to Chengdu this year, this might be the last time we would dine at the restaurant. Its 10-year lease runs out on Dec 31 and the chef has not negotiated an extension yet. He is considering moving to the United States and opening a new restaurant there instead.

So you will have to move fast if you want to dine here before it is gone for good.

The 16-seat Yu Zhi Lan is located in a quiet neighbourhood, nestled among a row of houses in a lonely lane. There is no signboard and you see the name on the house number plate set discreetly above the wooden doors only when you come up close.

A staff member led us into a small, desolate living room, then through a dimly lit corridor before entering the dining room, one of only three in the restaurant.

The cold dishes were laid out at the table - fried cashew nuts, fresh lily buds and lobster in "strangeflavour" sauce with multi-coloured spicy noodles, among others. Then more appetisers were served - fresh mulberries, spicy wood fungus, numbingly spicy shredded chicken and so on. The lobster, however, was overcooked and was dry and tough, while the other dishes looked plain and ordinary in individual small plates.

It took the next dish to impress - handmade noodles in clear broth with baby green cabbage and a slice of black truffle. The broth was delicately sweet, but it was the noodles that stood out. Made by the chef by kneading the dough with a bamboo rod, they were thin and very springy. The truffle added a mild fragrance to the broth, but did not outshine the noodles.

Other dishes that followed were presented without much artistry, although some came in containers of unusual shapes of a dragon-headed fish. But none tasted as exquisite as the noodles.

There was abalone simmered in its own sauce, sea cucumber in a hot and sour sauce, eggplant and pork rolls in fish-flavour sauce, and fried okra. At the end of the meal was a bowl of pumpkin cubes and broad beans in what tasted like boiled tap water.

Other than the noodles, there was nothing exceptional about the dinner, either in the food or the ambience, and we found the 1,000 yuan price tag (S$217) too much to swallow.

This article was first published on June 7, 2015.
Get a copy of The Straits Times or go to straitstimes.com for more stories.