China hit by new flood of dead pigs in river 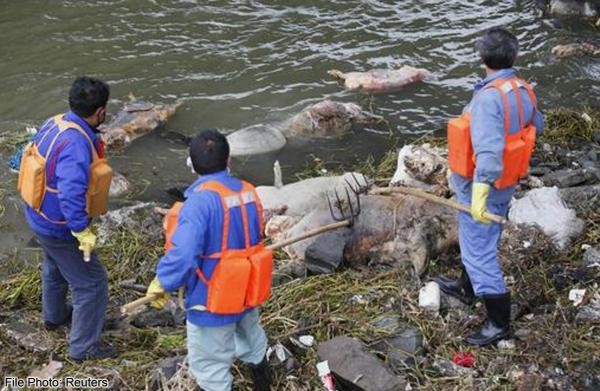 The dead porkers were recovered from the Gan river in Jiangxi, which supplies drinking water to the provincial capital Nanchang and is a tributary of the Yangtze, one of China's main waterways, the official news agency Xinhua said.

But tests showed that the tap water remains "safe for drinking", it said, citing Nanchang authorities.

"Another 20 pigs have been fished out of the Gan River, for a total of 157," state broadcaster CCTV said on an account on Sina Weibo, a Chinese version of Twitter.

Photos posted by CCTV showed staff in white clothing and face masks looking over carcasses lined up on a river bank.

Zhangshu authorities could not be immediately reached for comment.

A year ago China was stunned by the appearance of more than 16,000 dead pigs floating along parts of the Huangpu river which flows through Shanghai - one in a series of food-safety scandals in recent years.

No official explanation was given for the incident, which hugely embarrassed China's commercial hub.

Last May police detained 900 people for crimes including selling rat and fox meat as beef and mutton.

And in 2008 six babies died and 300,000 others fell ill in a massive scandal involving contaminated milk powder.

Public concern about food safety is high and in his address to China's parliament this month Premier Li Keqiang pledged to "apply the strictest possible oversight, punishment and accountability to prevent and control food contamination and ensure that every bite of food we eat is safe".