A medical worker draws blood from a woman for an HIV test during an event to raise awareness on World AIDS Day, in Kunming, Yunnan province, China.

China is facing its latest medical scandal after a large batch of human blood plasma treatment was found to be contaminated with HIV.

The batch of intravenous immunoglobulin - an immune therapy treatment made with antibodies from blood plasma - was produced by China's second-biggest medical blood products manufacturer, the state-owned Shanghai Xinxing Pharmaceutical Company.

Dated Tuesday, a statement from the National Health Commission (NHC) warned hospitals to immediately suspend use of the batch after the provincial health commission and disease control centre of eastern China's Jiangxi detected traces of HIV in it.

A representative of Jiangxi Provincial Disease Control Centre told The Beijing News on Wednesday that the contaminated Shanghai Xinxing batch had been reported to the NHC and that it had not yet discovered any cases of patients having contracted HIV. 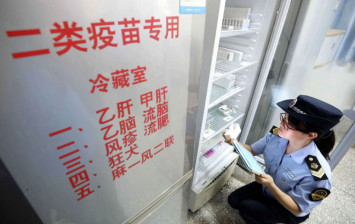 The faulty batch comprised 12,229 50ml bottles of plasma due to expire in June 2021, a source from the state food and drug regulator told the China Business Journal.

Immunoglobulins are antibodies produced by white blood cells that are used to treat immune deficiencies caused by illnesses such as leukaemia, hepatitis and rabies.

The NHC statement advised hospitals to report any stocks of the treatment and closely monitor the condition of patients who had already been treated with the defective batch.

The health commission of Shaanxi province in northwestern China released a statement on Tuesday confirming receipt of the National Health Commission's notice, and added that it would trace the batch for retesting. A member of staff told The Beijing News that 10 hospitals had reported back saying they had yet to find any patients who had contracted HIV.

Staff at hospitals in central China's Henan province and in Shanghai confirmed they had received the notice on Tuesday, reported Daily Economic News.

One head of haematology at a Shanghai hospital told the newspaper that they had not yet received the notice.

"If this is true, it would be a very low-end error," the unnamed doctor was quoted as saying. "Right now, the crucial point is to make clear whether it was caused by a blood donor or a problem with the product.

"We need to find out where the faulty batch was delivered and carry out a recall and re-examination."

He told the paper that patients treated with faulty blood plasma may not necessarily be infected with HIV, because there was an anti-virus treatment in the preparation process.

"[Patients] would need to be tested again to find out whether they were specifically infected," he was quoted as saying.

Established in 2000, Shanghai Xinxing is a biotech company specialising in the production and sale of blood-based medical products, according to its official website.

It is controlled by the listed China Meheco Group, one of China's biggest pharmaceutical firms, which is in turn owned by the China General Technology Group, a state-owned enterprise.

Shanghai Xinxing did not respond to requests for comment.

Read Also
Over 100 babies and toddlers given expired polio vaccines in China, months after last crisis 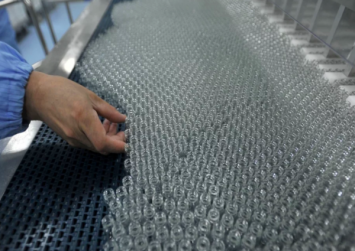 The incident came less than a month after it was revealed that 145 children in eastern China's Jiangsu province were treated with expired polio vaccines, which triggered widespread protests from parents and the investigation of 17 local officials.

But that paled in comparison with July's vaccine scandal, in which 252,600 faulty rabies vaccines made by Changchun Changsheng Bio-technology, one of China's biggest vaccine firms, were administered to thousands of toddlers.

In November, the government consulted the first draft of a vaccine management law that would allow people to sue drug makers for punitive damages in cases of death or serious illness caused by faulty vaccines.