2 held for cheering as girl jumps off building in China

Two people have been held for applauding as a 19-year-old female student committed suicide by jumping off a building in Gansu, China on June 21, according to Qingyang public security bureau.

The police are investigating the cause of the girl's death and have called on six people suspected of filming and cheering to surrender, the bureau said.

Sources said on social media that the girl, surnamed Li, was suffering from severe depression after she was molested by her high school teacher. The video posted by netizens showed Li hanging from a window of a tall building with a firefighter trying to pull her back.

According to the bureau, Li had attempted suicide four times since 2016. She first took drugs in October and December 2016 and then attempted to jump off a building last May before being saved by the police. This January she tried again by taking large amounts of anti-depression drugs. 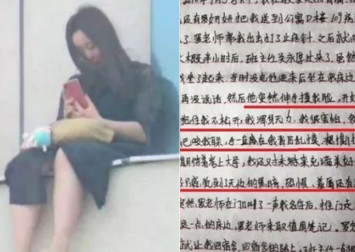 Li reported to local police last February that her teacher, Wu Yonghou, had sexually assaulted her. In the report, Li said she had stomachache and was told by the school nurse to rest at a dorm where Wu was in charge.

When Wu came in to check on her, he suddenly held her and touched her face. "Then he started to kiss my face, lips and ears," said Li in her report. "His hands were rubbing my back, trying to tear off my clothes."

"I only felt endless darkness and fear. I was disgusted and ashamed and barely slept that night."

The local police detained Wu for 10 days last May but Li's father found the punishment harsh and filed an appeal to the local procuratorate. After hearing the case this March, the procuratorate released Wu without charge.

Last Thursday afternoon, police received calls saying that Li had climbed out of the eighth-floor window of a local department store and was going to jump off. Police and fire brigade arrived shortly on the scene but failed to stop her.