24-year-old dies after collapsing during hike in Hong Kong

A 24-year-old man collapsed and died while hiking with a group of friends to Sai Kung’s High Island Reservoir.

A 24-year-old man collapsed and died while hiking in Sai Kung on Saturday in the third fatal incident on the city’s trails in as many months.

The young man, surnamed Yik, was airlifted to Pamela Youde Nethersole Eastern Hospital along with a 53-year-old man in the same group who felt unwell.

The pair were among a group of 21 people enjoying a day out in Sai Kung Country Park. The hikers started their journey from Pak Tam Chung and were heading to High Island Reservoir, according to police.

Citing a friend, police said the younger man collapsed halfway along the two-hour walking route, and was unconscious when emergency services arrived. He was confirmed dead after being airlifted to the hospital in Chai Wan.

The city was sweltering amid temperatures averaging 32 degrees Celsius on Saturday, with high humidity. A hot weather warning has been in force since Friday morning, indicating an increased risk of heatstroke. 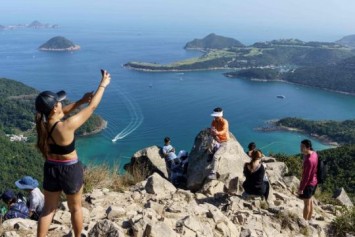 After months cooped up indoors amid the coronavirus pandemic, and still unable to travel abroad this summer, Hongkongers have recently flocked to the city’s great outdoors.

In addition to more common emergencies such as heat exhaustion and twisted ankles, at least two other hikers have died in recent months.

In late May, a 33-year-old man was found dead below a remote trail in Pat Sin Leng, in the northern New Territories, five days after he went missing while on a hike.

In April, a 24-year-old woman who had been missing for more than two days was found dead on Kowloon Peak.

Last year also saw a surge in mountain rescue incidents, which nearly tripled to 602 in 2020 from 215 the previous year.