It is that time of year again, when hundreds of millions of people will travel across China by rail, road, plane and, in some cases, on foot, to reunite with their families in their hometowns for the Lunar New Year.

In this year's Spring Festival travel season, known as chunyun in China, a total of 2.99 billion trips are expected to take place, up 0.6 per cent from 2018. The season runs from January 21 to March 1, with the first day of the Year of the Pig on February 5.

As with previous years, the number of train services and other transport options will be increased to accommodate the massive flow of people.

On the railway network, that will mean 4,787 train services before the festival and 4,860 after - 5.4 per cent and 5.2 per cent more than last year, respectively. 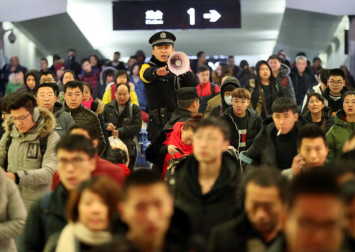 Similarly, the Civil Aviation Administration of China has scheduled 532,000 flights during those 40 days, 10 per cent more than the previous Lunar New Year rush. A total of 73 million plane trips are expected to be taken in the period, up 12 per cent from 2018.

State media has already begun releasing images of bullet trains being checked and maintained - some by police dogs - in preparation for the travel season.

Some people hoping to travel have expressed frustration on social media about the difficulty of getting tickets.

On a post advertising train tickets by China Railway on microblogging site Weibo, one comment read: "I have not managed to get a ticket for many years, it's very tiring."

Another said: "The system showed there were tickets available, but once I tried to confirm it, there were none left."

While the crowds are expected to be as massive as ever, this year marks several differences. For one, several high-speed railway routes will be put to the test during the Spring Festival travel season for the first time.

It will also be the first Lunar New Year period since China began applying its "social credit system" to flights and trains. Since May 1, people who have committed misdeeds - ranging from unruly behaviour on planes and smoking on trains to financial wrongdoings - have been placed on restricted lists, stopping them from taking plane and train rides for up to a year.

China has also deployed hi-tech systems such as robot guides, facial recognition and virtual reality navigation to cope with the enormous number of travellers.

While facial recognition is not new to public transport in China, the number of railway stations that use the technology has increased from 133 to 300 over the past year.

Robot guides have also been in use for some time. State-run tabloid Global Times reported that the robots at Guangzhou South railway station and Shenzhen North railway station have become so popular, they also serve as entertainment for passengers, who ask the bots to sing and dance for them while waiting for trains.

Technology has played an increasingly important role in the mass migration in recent years. Last year, facial recognition and ticketing apps were used to increase efficiency.