6 killed, 4 hurt in explosion at chemical plant in Hubei

Footage released shows thick plumes of black smoke billowing into the sky from the plant in Hubei province after the blast took place yesterday evening (Aug 4, 2020).

Six people have been confirmed dead so far and four others injured in a flash explosion at a chemical plant on Monday afternoon in Hubei province, the local government said on Weibo on Tuesday.

The accident happened at around 5:30 pm in a workshop of an organic silicon company in the city of Xiantao, about 100 kilometres west of the provincial capital Wuhan. The fire was put out at 7 pm.

A farmer working less than 1 km from the company's factory said he first thought the thud of the explosion was a tire blowout, but then he heard a loud sound again and saw thick black smoke rising in the air above the factory, Beijing News reported.

Windows of some nearby houses were broken, the farmer said, adding that he didn't smell any odor on site but still drove downtown to avoid possible air pollution.

One slightly wounded person has been discharged from hospital and the other three injured were being treated in hospital without life-threatening symptoms.

Local authorities organized departments related to public security, firefighting, emergency management, market regulation, environmental protection and health to dispatch 14 fire trucks and 100 rescuers to the scene, according to the post.

A meeting was held on Tuesday morning to urge companies and departments involved to launch major inspections in the city on production safety.

The organic silicon company, located in Liuxihe township, has suspended operations for an overhaul.

The cause of the accident is under investigation. 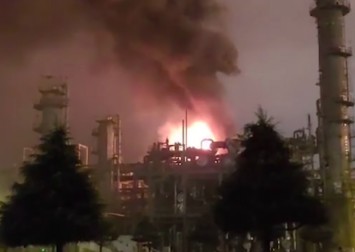 The company's businesses include organic silicon products, chemical materials and the production and sale of butanone oxime, a substance used in coating products that is harmful if it comes into contact with skin.

Founded in May 2015, the company was punished by the local environmental protection administration in June 2015 for failing to evaluate the environmental influence of an organic silicon project, according to Tianyancha, a data company providing information on Chinese enterprises.

In the past five years, the company has asked permission to expand production multiple times, according to Southern Metropolis Daily.

In April 2018, for instance, it announced the evaluation of the environmental impact of a project that planned to expand the old plant to produce 15,000 metric tons of butanone oxime and 3,250 tons of organic silicon annually.