Nine people were injured on a railway station escalator during the Thursday morning rush hour, according to Hong Kong's rail operator.

At about 9am, a metal strip sticking out of a side panel snagged the feet of several commuters while using an escalator at Ngau Tau Kok station.

An MTR staff member stopped the escalator immediately upon arriving at the scene. Three men and six women, who suffered minor scratches, were sent to United Christian Hospital for treatment.

"The station has notified the contractor responsible to check the escalator in question and to find out the cause of the accident," an MTR spokeswoman said, adding that train services on the Kwun Tong line had not been disrupted.

The accident happened on one of three escalators at the station that carry commuters from the platform down to the station lobby.

The strip, six inches in length, is intended to hold the escalator's balustrade panels in place.

It is unclear what caused it to come loose and protrude. 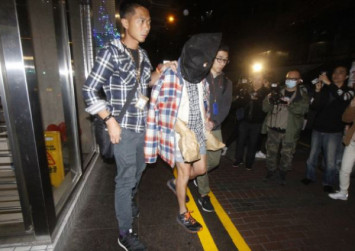 Alan Cheng Kwan-hing, the MTR's Chief of Operating, said there were no issues found during a regular maintenance check carried out by the contractor last night and inspections by staff this morning before trains service started.

"Our staff who inspected the escalator did not find any protruding component this morning," Cheng said.

"We are treating this incident very seriously and we're working closely with the escalator maintenance [company] and our staff to ensure that such unfortunate incidents don't happen again," he said.

He added that the MTR would inspect all similar types of escalators as well as reviewing surveillance footage.

The company had arranged for staff to visit the victims in hospital.

Charles Wong Kai-hon, a registered escalator engineer, who is also a principal instructor at the Vocational Training Council, said the accident was unheard of.

"In public places, like crowded MTR stations, those involved in maintenance should pay more attention to this matter from now on," Wong said.

After studying photos of the defect, Wong said the metal strip is normally fixed to the side panels on the escalator with screws.

He said screws could have came loose, and that passengers' clothing might have yanked the strip out of place.

While fixed screws on an escalator are items that need to be inspected during maintenance, he noted there are hundreds of them on a single machine and that not all were frequently checked.