A TV station in China has apologised after it was caught plagiarising a popular 90-degree backbend dance from another performance that went viral earlier this year during the 2022 CCTV Spring Festival Gala broadcast.

Zhejiang TV Station in eastern China said in a statement this week it had removed the online dance video called Shuang Xiang Jing and apologised to the production team behind Poetic Dance: The Journey of a Legendary Landscape Painting, whose work it had copied, The Paper reported.

Poetic Dance: The Journey of a Legendary Landscape Painting, called Zhiciqinglu in Chinese, also known as the "Blue-green waist" dance, is based on a famous classical Chinese painting by Wang Ximeng called A Thousand Li of Rivers and Mountains.

Wang was a Song dynasty (960-1279) artist who lived around one thousand years ago. His undated painting features a blue-green landscape to highlight an extensive mountain range.

The original dance was a hit at the CCTV gala show after a successful run in theatres across China last year. Its signature move is a series of demanding 90-degree backbends done by an all-female dance troupe, called "blue-green waist".

The dance move trended online afterwards as many people sought to copy the back bending technique at home.

On Sunday (May 22), Zhejiang TV Station's children's channel released a segment of a dance called Shuang Xiang Jing, or Double Fragrance Path in English, on WeChat. The station said the work was intended for the opening ceremony of a tea festival as an exhibition of Chinese and Buddhist culture, according to the description on WeChat.

Zhou Liya, one of the two directors of the original dance, questioned the originality of the dance Shuang Xiang Jing on Zhejiang TV Station's WeChat post but her comment was soon deleted by the station.

"It is almost a complete copy. Its costume, make-up, props and dance moves are nearly 99 per cent identical to our dance," she said.

"What hurt us the most is that their dance was promoted as an original piece," Zhou added.

"It is something we created after working hard, but it has been effortlessly stolen by somebody else and marketed as their original idea," Han Zhen, the other director of Zhiciqinglu, said.

Both directors went public with their accusations of plagiarism shortly after seeing the copycat performance.

The station later released a statement apologising for the infringement. 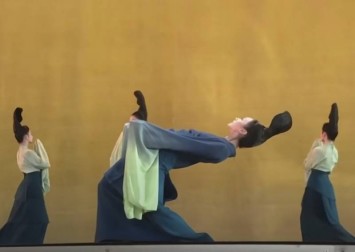 "Our channel has not implemented proper vetting procedures and our dealings have not been appropriate," the statement said.

"We are in contact with the creator of the dance Zhiciqinglu, and we hope we can be forgiven and this incident will be handled properly."

"This environment lets down those who create original works and we feel bitterly disappointed," Han said. "It hurts not only us, but also young choreographers who may think plagiarism is a shortcut to success."

Over the weekend, carmaker Audi and London-based advertising agency M&C Saatchi apologised for an advertisement accused of plagiarism.

The monologue delivered by Hong Kong superstar Andy Lau Tak-wah in the ad was revealed to have been copied from an original video published a year ago on Douyin by a vlogger, identified as "Beida Mange".