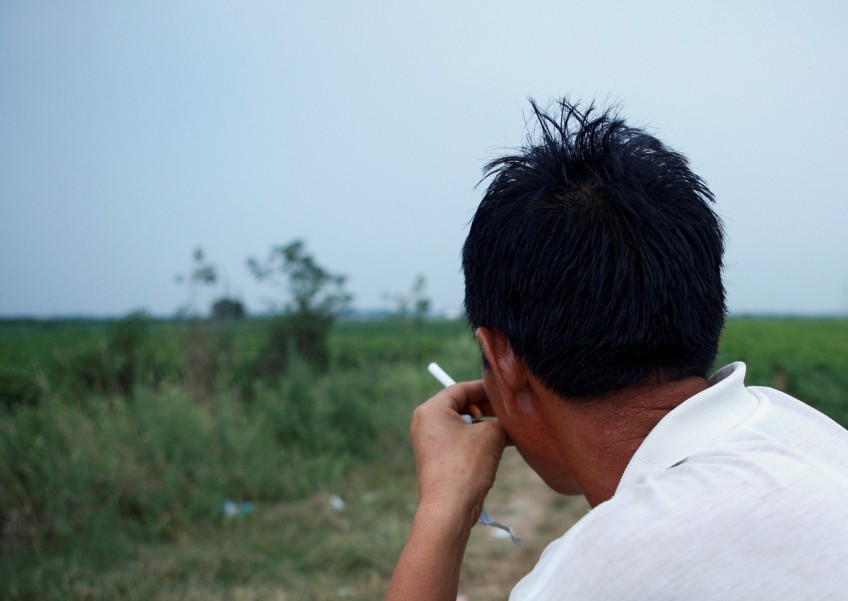 Zheng Xianqiao, the father of the student Zheng Dexing, who committed suicide after accumulating crippling debt, sits near his son's grave on a farm.
Reuters

DENGZHOU, China - In the final hour of his life, Zheng Dexing, 21, checked into a hotel and told family and friends in a flurry of phone messages that he was about to kill himself.

"Don't come collect my body - it's too humiliating," Zheng wrote to his father from Qingdao, the seaside city where he had fled from his hometown in the central province of Henan.

Saddled with crippling debt and hounded by collectors, Zheng plunged to his death from the hotel's eighth floor last year.

A second-year university student, he had racked up debt of nearly 590,000 yuan ($85,700) after taking personal loans from a dozen online finance companies to pay for his gambling habit.

Such tales of indebted students being driven to suicide have become commonplace in Chinese media and social networks in recent years, sparking public outrage.

Regulators say they are the result of a surge in borrowing driven by online lenders who target university campuses, often charging staggering rates of interest and employing violent collection methods.

Monthly compounded rates on loan contracts being offered in 2015 that were reviewed by Reuters were 1 to 2 per cent, implying an effective annual rate of 13 to 27 per cent.

Penalties for late payments were at least 0.5 per cent daily, equivalent to 517 per cent annually.

The lenders provide credit on easy terms, capitalising on a materialism prevalent among students eager to get the latest iPhone or laptop.

The ease of getting credit means that students often take out new loans to pay back older ones, or pay off interest, resulting in a cascade of unpaid debts and penalties that multiply at a dizzying rate.

The government has taken aim at the online lenders, suspending them in late June from extending new loans to university students.

It has also ordered state banks to take up the credit slack, a major reversal as the lenders withdrew from the student market in 2009 amid fears over high default rates.

Many of the online lenders have complied with the suspension, but still appear to be targeting students - and there is an unknown number of existing loans yet to be collected.

A third-year university student in Beijing said he initially borrowed about 10,000 yuan to buy an iPhone 6s last year.

Now he owes more than 200,000 yuan to two dozen online finance companies after taking out a series of new loans to pay back debts and due to spiralling interest.

Harassed by debt collectors, he has dropped out of university. "I was reckless. I wasn't thinking about the consequences," he said, declining to be named out of fear of loan collectors.

The first online finance companies targeting university students emerged in 2013 and thrived in a regulatory vacuum in which they were not required to secure lending licences.

Official statistics are unavailable, but the state news agency Xinhua reported in March, citing unnamed research, that the industry had grown to more than 80 billion yuan by 2016.

Students said the universities turned a blind eye to the practices. However, the companies started disappearing from many campuses in 2016 after a spate of student suicides made headlines, they said.

There were no advertisements for the companies visible during a recent visit to Zheng's campus at the Henan University of Animal Husbandry and Economy in Zhengzhou, in Henan province. But advertisements could still be seen at some campuses in Beijing.

It is not clear if universities were paid by the finance companies. Zheng's university did not respond to an emailed request seeking comment and phone calls to the university's propaganda department went unanswered.

Once hooked, students are extended loans on easy terms. Applicants usually only need to provide their contact details, as well as those of family and friends, according to those who took out loans.

Some women have to submit images of themselves nude, or performing lewd acts, as collateral, and threatened that they will be posted online if debts are not paid.

Reuters has reviewed a file of so-called "naked collateral", videos and pictures of more than 160 naked college women holding their identification cards or IOUs.

Jiedaibao, the online finance firm named on the IOUs, said in an online statement that it was merely a "money transfer channel" for lenders and borrowers, and did not request "naked collateral".

Collection is also often enforced by violent thugs, according to parents and students. "It was terrifying," said a first-year college student in Henan who owed 70,000 yuan, describing threats from loan collectors. "Some boys were tied up and beaten." The student said she had to drop out of university.

Fraudulent applications, in which students' personal details were misappropriated by others seeking loans, are also common, according to police reports.

In Zheng's case, the identities of 28 other students were used by him to secure loans, according to a lawyer who advised his family. The lawyer declined to be named as he was not authorised to speak with foreign media.

The student loan problem is just a small part of China's massive financial system, but public anger over the practices of loan companies has prompted the government to act.

Guo Shuqing, chairman of the China Banking Regulatory Commission, said at a meeting of the regulator in April that campus loan companies had a "very bad social influence", according to an official with knowledge of the matter.

Fifty-nine campus lenders had left the market as of June 23, according to the People's Daily newspaper, citing statistics by Yingcan Consultancy.

But there are believed to be dozens more still operating, according to industry sources and a review of finance companies websites.

Some loan companies are rebranding themselves as credit services to "young people", according to their websites.

It is not clear if the ban will become permanent.

Mingxiaodai has extended nearly 10 billion yuan in loans since it was founded in 2013, he said.

Zeng defended his company and the industry, saying that most companies operated ethically and charged an annualised interest rate of 15-20 per cent.

The state banks, meanwhile, have already returned to some campuses.

In September, Industrial and Commercial Bank of China announced it had started to offer loans to university students in 10 cities.

And in May, China Construction Bank (CCB) and Bank of China announced loan programmes in selected universities.

CCB does not require collateral and allows students to apply for a maximum of 50,000 yuan, charging an annual rate of 5.6 per cent.

Zheng Xianqiao, the father of the student who committed suicide, is still reeling from his son's tangles with the loan companies.

Zheng, a farmer, used his life savings of 120,000 yuan to help pay back part of his son's loans. "Campus loan companies ruined my child's wonderful life," he said.

"We spent everything we had in the family to repay his debt." But, he said, "in the end he was still hounded to death by campus loans."