A handout photo. A Chinese airport toilet has been swamped with visitors wanting to see it’s bathroom, which is partly made with ancient fossils.

An airport toilet in southwestern China has shot to fame after a top palaeontologist revealed in a TV programme that the material used to build some of it is filled with fossils.

He then showed pictures he took of the washbasin in the toilet of Longdongbao International Airport in Guiyang, Guizhou.

“You can see the white patterns in the construction materials of the sink. These patterns are the fossils, belonging to the brachiopod fossil category which dates back to hundreds of millions of years ago,” Shen said.

“At that moment I had an impulse to take them down. These shells contain many secrets of the earth’s past, such as what was the environment then and what temperatures the seawater was measured at.”

Shen didn’t expect that his brief mention of the fossils to make the rounds on social media, triggering discussions among not only geology experts, but also the general public, with reports of people turning up to take photos of the toilets.

“It’s so luxurious!” wrote one person on Weibo.

“I bet people using the toilet should be joyful,” another user commented.

“My curiosity may drive me to buy a ticket to fly to Guiyang,” said another.

The next day, Chen Shangbin, a geology professor from China University of Mining and Technology in Xuzhou of Jiangsu, who was attending a conference in Guiyang last week visited the airport’s toilet after watching the programme, the Yangtze Evening News reports.

“The aim for Academician Shen to show the fossil pictures (on TV) is to tell the public that we can encounter fossils in our life,” Chen was quoted as saying. “After seeing his photos, I was curious and wanted to have a look.”

An unnamed official at the airport’s propaganda department told the newspaper that they received plenty of phone calls inquiring about the fossils in the toilet recently.

“I can tell you that it is fossil remains. We purchased the construction materials,” the official said.

After seeing the photos uploaded by Chen to social media, Qian Maiping, an expert from the Geological Society of Jiangsu Province, said he initially thought the fossils were stringocephalus, formed about 300 million years ago, the newspaper reported.

But after double-checking with Shen, Qian later confirmed that the fossils found in the toilet were of a little-known species paraconchidium shiqianensis, which is 439 million years old.

He said the fossils were found scattered about because the bodies of ancient creatures sinking to the seabed were stirred up by natural forces. 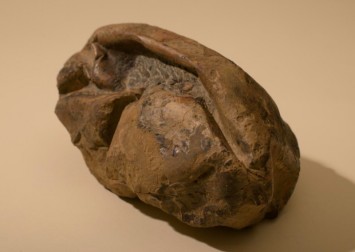 Guizhou is often dubbed an ancient creatures kingdom for its rich fossil finds. Experts have said fossils discovered in the region cover almost every category of ancient species.

But the construction industry would rather not use the stones embedded with fossils given that the fossils affect the stone’s purity, density and outer appearance, he said.

“This kind of rocks are only meaningful for clients who like fossils,” said Liu.

But ever since Shen introduced the airport toilet’s fossil stones on TV, the stone’s price surged from 200 yuan (S$41.01) per square metre to 1,000 yuan, according to Liu.

Calls by the South China Morning Post to the department today went unanswered. It’s not clear when the toilet was built using the fossils.