Chinese scientists who analysed 1,000 eggshells unearthed in central China have concluded that dinosaurs were already in decline before becoming extinct 66 million years ago.

The team said the eggshells found across 150 metre-thick rock layers represented only three species of dinosaur eggs found across habitats from the final two million years of the Cretaceous period, showing a clear drop in biodiversity compared with older fossil records.

They said global climate fluctuations and the massive Deccan Traps volcanic eruptions in India led to shrinking diversity and few dinosaur lineages at the end of the Mesozoic Era, making the reptiles vulnerable to the mass extinction that coincided with a 10km-wide asteroid strike in Mexico.

Study lead author Wang Qiang, an associate researcher at the Institute of Vertebrate Palaeontology and Palaeoanthropology of the Chinese Academy of Sciences, said dinosaurs eventually lost the ability to adapt to, and recover from, sudden changes in the environment.

"Dinosaurs went extinct gradually over millions of years, instead of coming to an abrupt end from sudden disasters," he said.

In an article published in the American peer-reviewed journal Proceedings of the National Academy of Sciences on Tuesday, the researchers wrote: "Our results support a long-term decline in global dinosaur biodiversity prior to 66 million years ago, which likely set the stage for the end-Cretaceous non-avian dinosaur mass extinction.

"The end-Cretaceous catastrophic events, such as the Deccan Traps and bolide impact, probably acted on an already vulnerable ecosystem and led to non-avian dinosaur extinction," they wrote, referring to the eruptions in India that caused worldwide temperature swings and the asteroid that sparked a heatwave and soot in the air that reduced the amount of light reaching the Earth.

The authors – geologists and palaeontologists from the China University of Geosciences in Wuhan and the Chinese Academy of Sciences in Beijing – dated more than 1,000 pieces of well-preserved dinosaur eggshell and several intact dinosaur eggs found in the Shanyang Basin in East Qinling, or Qin Mountains in Shaanxi province.

They said the site hosted "one of the most abundant dinosaur records from a Late Cretaceous sequence". 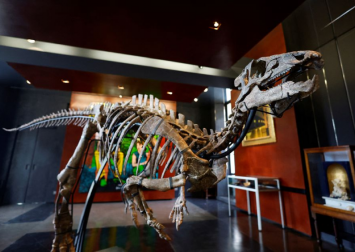 Analysis of all of the dinosaur records in East Qinling, or shows that eight clades of dinosaurs were present there during the Campanian, the fifth of six main divisions – or ages – in the Upper Cretaceous Series, according to the study.

But from the late Maastrichtian, the last division, only three families – the birdlike Oviraptoridae, duck-billed Hadrosauridae and Tyrannosauridae – and a few specimens of sauropods with long necks and tails were seen.

"Abundant dinosaur egg deposits found in southern and eastern China represent a comparable variation in low diversity from the Campanian to the Maastrichtian," the researchers wrote.

"These discoveries suggest a long-term decline in diversity among dinosaurian lineages from the Campanian to the late Maastrichtian.

"In particular, our data point to a low level of dinosaur diversity in the Shanyang Basin sustained for at least two million years prior to the end-Cretaceous mass extinction."

After combining data from studies assessing the same period in North America, the Chinese team said it was likely that dinosaurs were already in decline globally before their extinction.

Wang said the next step would be to look further into how the Deccan Traps eruptions and asteroid impact affected the environment for animals before the mass extinction.

"Which was the determining factor for dinosaur extinction? Was it changes in their genes that led to the loss of adaptability or was it the environment that became too harsh for them?"