Several hundred customers of bike sharing company Ofo lined up outside its main office in Beijing on Monday to demand an immediate refund of their deposits, increasing pressure on the cash-stretched Chinese sharing economy pioneer.

After hearing local Chinese news reports on Monday morning that said users who personally went to Ofo's office on Sunday were able to get refunds right away, hundreds of Beijing residents headed to the company's headquarters in Zhongguancun.

Early users were asked to pay a 99 yuan (S$19.70) deposit which was later raised to 199 yuan before they could rent the bike service. Riders could request a deposit refund anytime but doing so via the Ofo app meant there was a waiting period of 15 working days for the refund to be received.

However, some Ofo users have complained that they were not able to get their deposits back even after the waiting period.

"I asked for a refund over a month ago and my hundreds of phone calls to the Ofo service line went unanswered," said a recent college graduate surnamed Qiu.

Qiu, 25, said the main reason he does not want to use Ofo bikes any more was because of the poor user experience as the bikes did not receive proper maintenance, but added that as he was still unemployed getting his 99 yuan back was important. 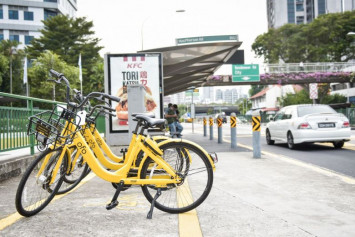 Ofo is being sued over unpaid bills by its suppliers. Bike makers Shanghai Phoenix Bicycles and Tianjin Flying Pigeon Cycle Manufacturing as well as logistics services providers Best and Deppon Logistics are among the firms that have recently sued Ofo. The lawsuits reflect the challenge of slowing demand for bike-sharing services in the world's second-largest economy.

"Due to Ofo's large user base, it's possible that the number of application for deposits refund will surge drastically," the company said in a statement on Monday evening on its official account on Weibo, China's Twitter-like social media platform.

Users who were present at the company's headquarters for a deposit refund will join the queue with those who applied online, to have all applications processed in chronological order, according to the statement. The company asked its users to be patient and pledged to settle the deposit refunds.

A woman in her 50s at the front of the queue on Monday said she had been waiting for more than an hour in Beijing's chilly winter. "I came here after I read news on Jinri Toutiao," said the woman, who declined to be named. Jinri Toutiao is a popular Chinese-language news app that recommends news to readers based on AI algorithms.

A middle-aged woman at the end of the line was seen knitting a sweater to kill time. Another middle-aged man in the middle of the line said it looked impossible to get his money back on Monday since too many people were ahead of him. He said he was planning to come back early Tuesday morning to try again.

The large crowd attracted the attention of local police who dispatched officers in five police cars. "We are here to make sure everyone is safe," one of the policemen said.

"If this deposit issue can't be solved properly, people won't trust any service that requires a deposit in future," said a 22-year old Peking University student, who had waited for around an hour with two of his classmates.