Animal welfare inspectors continue their rescue on Sunday for the cats and dogs remaining at the Stray Wonderland shelter in Ta Kwu Ling.

As many as one-fourth of the nearly 150 dogs and cats found at a ramshackle animal shelter in New Territories were found dead, with many of the animals believed to have been starving in their final days.

Spokeswomen for the police and the Agriculture, Fisheries and Conservation Department said on Sunday that 110 animals were rescued in the two-day operation at the Stray Wonderland shelter in Ta Kwu Ling.

The spokeswomen said 74 dogs and 36 cats were saved from the shelter. Of the 36 dead animals that were discovered - including skeletons and rotting bodies - 28 were dogs and eight were cats.

On Saturday, the first 10 carcasses were discovered in a raid on the facility, with the surviving animals found living in a rubbish-strewn facility described as a "sea of urine and faeces".

Police arrested a 62-year-old man, said to be the site manager, for animal cruelty on Saturday after the raid by inspectors from the AFCD.

Berry Ng Yuen-fun, the chief inspector for the Society for the Prevention of Cruelty to Animals (SPCA), revealed grim details as police and animal welfare officials continued the rescue operation on Sunday.

"Some [dead animals] were found on the ground, beds, cupboards or in cages," he said. "The area was very dirty with faeces and we did not see any water provided for animals." 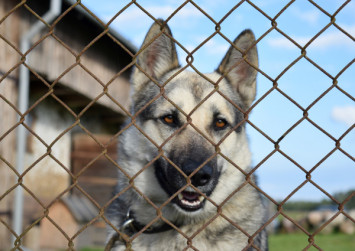 Ng believed some of the cats and dogs died of starvation, thirst or diseases.

"Those who survived were emaciated and when we gave them food and water, they were fighting to eat or drink," he said. He added that none of the animals were now suffering from life-threatening problems.

Ng also said there were bags of unopened dog and cat food at the shelter.

He said the AFCD took most of the dogs for relocation, while the SPCA's veterinary team was treating those that were weak and malnourished.

The carcasses would be sent for autopsies, Ng said.

A brown mongrel was rescued on Sunday morning from a shelter in Ta Kwu Ling, emaciated with ribs clearly seen through its fur. pic.twitter.com/GVBxp2DEEM

The authorities were seen carrying two metal cages each with a dog in them. The woeful dogs, one brown and one brown and white, were so malnourished they resembled skeletons.

"It's so skinny," said a volunteer when the brown dog appeared.

A couple arrived at the shelter with their son at around 1pm.

The father, who declined to be named, said the family left six pet dogs at the shelter about two months ago and had planned to bring the animals home in recent days.

"I did not know the conditions at the shelter were so bad," he said. "I'm very sad."

Seven animal welfare volunteers were at the site to check the dogs, which had either been rescued from the streets or were strays staying at the shelter after being neutered.

"We are seeing if we can take them back, but all we can do is wait after the police took our phone numbers," said one of the volunteers.

Another, who also declined to be named, said she was worried the authorities would be unable to take in so many dogs at one time.

"If you cannot give us the dogs back, just please do not euthanise them."