Are young Chinese falling out of love with marriage?

Young Chinese are increasingly reluctant to get married, according to a new survey – a trend that threatens to make the country’s dire demographic prospects even worse.

Despite the traditional importance attached to marriage in Chinese culture, the survey of nearly 3,000 unmarried people aged between 18 and 26 across the nation found that 25 per cent of those asked “will you get married in future?” were not sure, while 8.9 per cent said no.

This tendency was more pronounced among women, 44 per cent of whom said that they did not think they would get married or did not want to, compared with 19 per cent among men. The study was published last week in the official Guangming Daily.

“Generation Zers, or those born in the internet era, will make up most couples in the next decade.

“Their willingness to marry deserves great attention,” wrote the researchers from the Communist Youth League led by Ju Xiaoyan.

“In recent years, we found that an increasing number of young people put off marriage or are reluctant to get married. It has become a looming threat to society as a whole .”

China is facing a major demographic challenge as the working age population, the bedrock of the economic miracle seen in the past few decades, shrinks rapidly while over-60s are expected to make up a third of the population by 2050.

To slow down the trend, China ended the decades-old one-child policy in 2016, allowing couples to have two children, before allowing a third this year .

In recent years, President Xi Jinping has promoted family values and said women have an important role as carers, while his own marriage to the singer Peng Liyuan has been touted in state media as an example to follow.

But despite this, the number of marriages has been declining for seven consecutive years. According to China’s Ministry of Civil Affairs, 8.13 million couples registered a marriage last year as the impact of the Covid-19 pandemic exacerbated the downward trend. That figure was down 12 per cent from 2019 and 40 per cent lower than the 2013 peak﻿.

As a proportion of the overall population, the numbers getting married in 2019 stood at 6.6 per 1,000 people, compared with 9.9 in 2013 – figures that reflect the fall in the numbers of marriageable age as a result of the one-child policy. 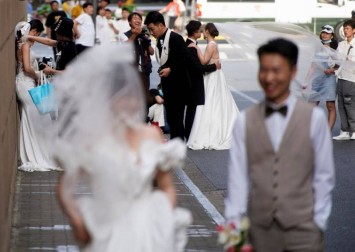 National census data released in May showed China’s fertility rate had fallen to 1.3 children per woman last year, well below the replacement level of 2.1 needed for a stable population.

Meanwhile the number of divorces has been increasing as the social stigma surrounding it fades and women gain greater autonomy.

The number of registered divorces in China reached a record 8.6 million last year – almost double the 2019 total and eclipsing the number of marriage registrations for the first time.

Alarmed by the rise, Chinese authorities have now instituted a 30-day cooling-off period for couples who want to split up.

The youth league survey found many people were worried about the costs of having a family, were overwhelmed by a “marriage phobia” either as a result of their personal experience or media reports, or were “unmotivated” to search for true love.

In Shanghai, Beijing and other big cities, high living costs and the prevalence of overtime work were stopping people from getting married or having children.

Meanwhile, well-educated and financially independent women have greater choices and are increasingly reluctant to be pushed into marriage.

The researchers also said the internet was having a significant influence.

“On one hand, the booming internet entitles young people more say in their social life. While staying outside marriage, they embrace a free and unfettered lifestyle where they can devote more time to their career and personal interests,” the researchers wrote.

They continued that on the other hand, people were also being bombarded by negative information that put them off marriage.

But Zhou Pingfan, 23, a software developer in Nanjing, said he was put off by the unhappy couples he knows in real life.

“I have four cousins, and all of them divorced after less than three years of marriage,” Zhou said. 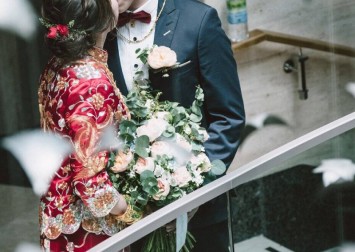 Since he broke up with his girlfriend two years ago, Zhou has been spending most of his time writing computer programs or playing video games.

“The internet world provides a refuge. It allows me to escape from the monotony of daily life. In the internet world, you can have a perfect love affair anytime without getting hurt,” Zhou said.

Tao Meng, 25, a bank employee in Beijing, said she believes in true love, but does not think marriage is a must.

“My career is just beginning. I have so many things to do and so many challenges to meet,” Tao said. “I have friends who are busy with blind dating every weekend. I think they enjoy the dates, but I’d rather spend time doing something else, for example, reading a book.”

She said she was content with the status quo: a promising career, a comfortable life at home with her parents, several friends to hang out at leisure time, and a virtual cat she is raising via a mobile application.

“Marriage means I have to share the financial burden of owning an apartment, a car and raising a child. It would also mean a new work-life balance. I’m not sure if I’m prepared for the changes. After all, marriage is a luxury. Not everybody can afford it,” Tao said.

The researchers suggested the education authorities should design courses and include lessons about the importance of marriage in the ideological and political curriculum at schools and universities.