A handout photo. Performance artists put toy fish in a polluted river in Zibo, Shandong province, to make it look like ‘hotpot fish’ in order to promote public awareness about environmental issues.

It was the biggest hotpot fish soup anyone has ever seen. Fifty one-metre-long fish were dancing in orange “soup” that ran two kilometres by 15 metres, accompanied by 10 red peppers. However, no part of the “hotpot” was edible. The fish and peppers were cotton toys stuffed with balloons inside, and the “soup” was a part of the Yueyang River in Zibo, a city in eastern China’s Shandong province.

It was a project to raise public awareness about river pollution, curated by a Chinese performance artist, who goes by the pseudonym Brother Nut to avoid harassment. Brother Nut first heard about the river, which locals nicknamed “Little Yellow River”, in February when a young man from Zibo sent him a few photos. He went to the city in March and talked to villagers living along the river.

Locals said the river has looked that way for a couple of years. There is no direct evidence of the cause; it is suspected pollution from a local coal mine and chemical factories is the source though. There are also deserted mines nearby, which have been used to dump industrial waste.

“The villagers all told me, ‘It’s affecting our lives a great deal’, and ‘We know it’s toxic, but the issue can’t be solved’,” Brother Nut told the South China Morning Post.  Shandong province has traditionally been a heavy industrial area crowded with chemical plants. In 2018, the provincial government issued a policy to better manage the factories for safety and environmental reasons, and shut down 4,000 out of nearly 10,000 plants, according to media reports.

Brother Nut decided to launch the hotpot performance art project to bring the issue to the attention of authorities and the wider public. With the help of volunteers and friends, Brother Nut purchased the toy fish and peppers. Then, on March 27, they walked into the waist-deep water and dumped them in the river.

They filmed the process and uploaded photos and videos to social media. “The pollution is so heavy that the fish are dying,” one comment online said. “For a second I thought it was the real Yellow River,” another said. Since the project went viral, Brother Nut has received requests from people identifying as “local agencies” to delete his social media posts.

One even offered him 10,000 yuan (S$2,057.30). They would not clarify whether they were with the local government. In response to the viral posts, local river chief Xie Hairong told The Beijing News that the river has been this colour for about three years and he believes it’s due to an accumulation of minerals in the river.

The Post could not reach the local environmental bureau for comment. It is not Brother Nut’s first performance art evoking public awareness about a social issue. He has developed a signature style over the years, where he creates flamboyant, sometimes comical performance projects that generate discussion on serious issues. In 2018, to shed light on water pollution in a village in central China’s Shaanxi province, he put the water in 10,000 plastic bottles from the famous brand Nongfu Spring and exhibited them in Beijing. 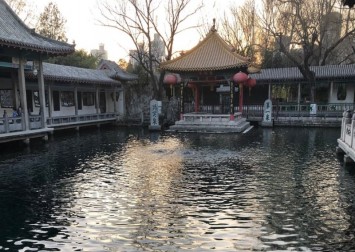 In the two years afterwards, NGOs, media and volunteers joined in the investigation and pushed for the local government to respond. Eventually, it attracted the attention of China’s Ministry of Ecology and Environment, who said they will look into the matter. “It’s not an entirely satisfactory result, there are still many issues left unsolved ... but I’m hoping there will be gradual changes over time,” he said. Other previous projects covered various social and environmental issues.

In 2020, during the Covid-19 outbreak, Brother Nut stayed silent for 30 consecutive days , to protest censorship of information during the crisis. Brother Nut tried creative ways every day to seal his mouth, including using packing tape that read “404” – the error code for a web page not found, clipping on three metal clasps, and wearing a mask that said, “shut up”.

In 2019, to protest that some clinics still offer “conversion therapy”, which they claim can “cure” homosexuality with shock treatment and drugs, Brother Nut opened a “clinic” in Shenzhen, Guangdong province that he claimed he can turn straight people gay . He is still thinking about how to take the next step on the river pollution issue and said he welcomes public participation.

“Our role is to bring an issue to the public attention so that more people can join in the investigation,” he said. “What I’m doing isn’t the finish. I hope people can start from here and push even further.”