Back at work, and 'no regrets': Fireman badly burned in 2017 furnace rescue

“I asked myself a lot if I felt regret. The answer is no.” Brian Lee.

A Hong Kong firefighter who spent a year recovering from serious burns after saving a woman from a temple furnace in 2017 has said he harbours no regrets and would go into the red-hot compartment again, given the choice.

"Doctors might have had to remove my leg in the worst-case scenario. The burn destroyed all my nerves and blood vessels in my left leg," Brian Lee Shek-hei said.

"I asked myself a lot if I felt regret. The answer is no. If it were not me, my mates would have done the same thing," the 37-year-old said.

On September 10, 2017, a 59-year-old woman jumped into a 4.5-metre-deep furnace at Yuen Yuen Institute, a Taoist temple complex in Tsuen Wan. Firefighters arrived in four minutes. Lee was among them, and went deep into the furnace with colleagues Kwan Kam-fai and To Chun-on. They put the woman onto a stretcher and had her outside the furnace in three minutes, but she would die two days later.

Kwan and To sustained minor burns to their legs, but were discharged from hospital the same day.

Lee was less lucky. He suffered third-degree burns to 7 per cent of his thighs and lower legs, mainly the left one.

He was in hospital for two months, during which he had three major operations, followed by another 10 months of therapy. He finally returned to work last September, starting with some office work before returning to the front line this month.

Lee recalled the most painful part was cleaning the wounds for three hours every day. Surgeons removed his dead skin and burned tissue, and replaced them with artificial skin. He survived the pain by using morphine and analgesic injections.

"I did cry during the toughest period. But things had happened. I think the operation was a success," the 11-year veteran continued. "People asked why we needed to go deep down to the structure to save the woman. It was because we wanted to pull her out alive, not dead."

Read Also
Police, firemen search for cause of explosion that collapsed building in Japan's Sapporo 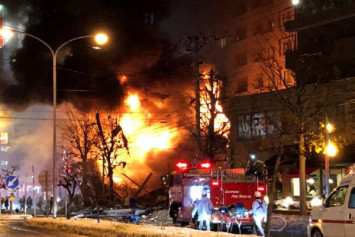 Lee received a medal for bravery from the chief executive last year.

Principal Fireman Chan King-tat was among the first on the scene for the rescue, and led the operation. Chan said the furnace was divided into three units, with the middle one burning at up to 600 degrees Celsius. The woman, however, fell into the unit on the left side, which was not burning at all. The temperature of that unit stayed about 60 degrees.

The cause of Lee's injuries remained a mystery, as the entire crew wore protective outfits known as "gold jumpsuits", which can withstand temperatures of up to 1,000 degrees.

Chan stressed he had assessed the risks before sending the group down to the furnace, and had not made a mistake.

"Did we feel bad for sending Lee there, resulting in his injuries? No, we didn't and we have no regrets as well," Chan said, adding that all firefighters were well trained.

The 28-year veteran said firefighters came with a sense of mission, while the feeling of achievement was beyond words. "We feel proud when we can help people in need," he said.

Lee, a former lifeguard, was asked if he had feared he would no longer be a firefighter after the injuries. He said the doctor gave him great confidence by ensuring a speedy recovery, helped by his young age. He spent months training himself and showing his superior officers he was ready to get back in the fire engine.

"On my first day back at work, I was very thankful that I could continue the job that I like," he said. "I was excited to see my buddies at work."