Bad hair day: Chinese man arrested for attacking barber with his own clippers

A man who attacked a barber he accused of giving him a bad haircut has been charged with assault and detained.

A man from southwest China who shaved the head of a barber he accused of giving him a bad haircut has been charged with assault, according to local media reports.

The victim, surnamed Li, called the police after a customer named Chen attacked him on March 31 at his barbershop, Chinanews.com reported on Tuesday.

In video footage published by Pearvideo.com, Chen is seen complaining to staff about Li's handiwork at the salon in Chongqing.

"This is a picture of the style I wanted," he says, pointing to an image on his phone and then to his hair. "Now look at this. Here, I'll give you a haircut."

Chen, who is much bigger than Li, then picks the barber up and tries to force him into a chair. The pair wrestle for a while, but Li eventually acquiesces and sits still as Chen starts to shave his head.

Police later apprehended Chen and detained him on a charge of assault, the newspaper report said. It did not say how long he would spend in custody.

A person from Hong Kong made light of the assault, saying, "So many times I've wanted to do this. Finally someone has done the thing I'm afraid to do." 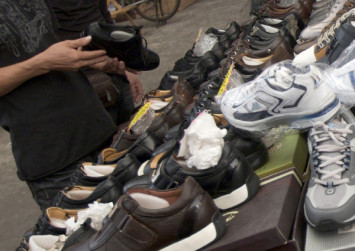 Another Weibo user was less flippant about Li's frightening ordeal.

"Hair grows out in a week, why did he [Chen] need to bully the person like that?" said the person from Liaoning province.

Grooming mishaps in China do not always end in violence, however.

Last year a man from the eastern city of Hangzhou became something of a celebrity after pictures of him raising his eyebrows at his "odd" haircut became an online meme.

The property agent, known as Wu Zhengqiang, found himself in the digital spotlight after appearing on the consumer watchdog programme 1818 Golden Eye to complain about being charged 2,500 yuan (S$504) for the coif.

Despite his initial disappointment, after his online elevation Wu appeared in a television variety show and a number of advertisements.