Workers installed a new portrait of the late Mao Zedong on the Tiananmen gate in Beijing this year, but his birthday was not marked.

While parts of the world celebrated Boxing Day, December 26 was also the date of birth of one of China's most important and controversial figures: Mao Zedong.

Several events took place on Thursday in Shaoshan, the county-level city in central China's Hunan province where the former leader was born in 1893.

One video on social media showed wreaths placed around a statue of Mao, while another showed groups of attendees wearing red caps and standing on a flight of steps in the city.

"Bow once towards the statue of Chairman Mao," an announcement said.

A worker at Mao's former residence in Shaoshan said a high number of visitors had come to honour the late leader on the 126th anniversary of his birth.

"There was no official event organised; people came on their own initiatives," she said, declining to be named because she was not authorised to speak to the media.

Across the world, the birthdays of many national leaders and founders are marked by national holidays, from George Washington in the United States to Mahatma Gandhi in India.

The birth of Mao, however, often passes without official acknowledgement.

Despite his status as the founding father of Communist China, Mao remains a divisive figure in the country. Beginning in 1958, his Great Leap Forward campaign resulted in a famine that left as many as 30 million people dead.

Millions more suffered as violence gripped China during the Cultural Revolution that began in 1966.

In line with the Communist Party's official position, President Xi Jinping acknowledged on the former leader's 120th birthday in 2013 that Mao "made mistakes" despite his achievements.

Yet historians have said that Xi, since becoming the paramount leader in 2013, has resurrected the patriotic values of the early Communist regime, ruling in a powerful style reminiscent of the Mao era.

As part of October's celebrations to mark the 70th anniversary of the founding of the People's Republic, Xi and other top officials visited Mao's mausoleum in Beijing and bowed three times to the former leader, whose body is embalmed and kept in the building's central hall.

But some previous celebrations of Mao have been interrupted. Last year, Qiu Zhanxuan, a Peking University student and chairman of a Marxist society, was detained while on his way to celebrate the anniversary of Mao's birth in the capital.

Observers said that the Communist Party had made Mao's achievements and mistakes clear, but was wary of activism that could challenge Beijing's rule.

"Any officially organised event might send conflicting messages to the people, who might turn such a mass gathering into something totally unexpected," said Zhou Xun, a historian at the University of Essex, in Britain, who added that past celebrations in Mao's birthplace had been taken as opportunities to air grievances. 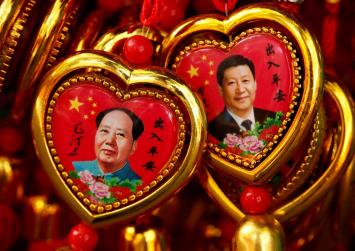 "The lack of emphasis is probably due to the difficulties Xi and the Communist Party are facing in view of the trade war and strategic confrontation with the US and the West in general, the slowdown of the Chinese economy, and the rise of social grievances, not to mention the Hong Kong political crisis," said Jean-Pierre Cabestan, a professor in political science at Hong Kong Baptist University and expert on Chinese politics.

"An emphasis on Mao's contribution would be out of step with the current need to unite."

Cabestan said that despite the lack of official acknowledgement, Mao's standing remained unchanged.

"His portrait remains on the Tiananmen gate, and he will remain the founder … of the People's Republic of China as long as it exists and survives," he said.